The release date for He Shed She Shed season 2 — Pending

This article has the most up-to-date info on the status of He Shed She Shed season 2 as we continuously monitor the news to keep you in the know. FYI is yet to make a decision on its future. Subscribe to our automatic updates below. 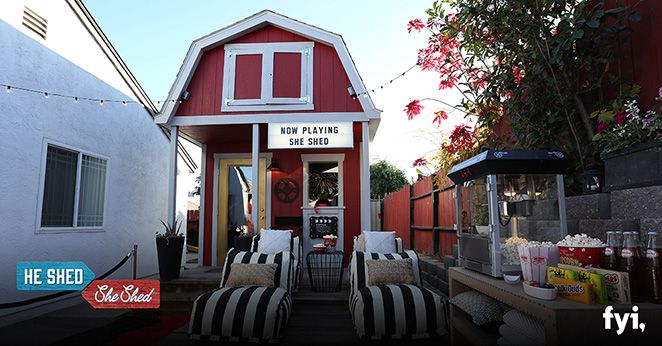 He Shed She Shed is a new American reality television series that premiered on FYI on April 2, 2016. It`s a Loud TV and Plum Pictures production, with Nick Rigg, David George, Jordana Hachman, Stuart Cabb, Gena McCarthy and Toby Faulkner serving as executive producers. The series consists of six one-hour episodes, and is produced with assistance from Wayfair, the online home-goods giant, whose furniture and fixtures are featured prominently on the series.

The growing trend of transforming country sheds into ingenuous outdoor spaces that provide a creative twist on the outdoor fun. With the trend towards small spaces for sustainable living these sheds have found their niche – from backyard pubs to work space to boudoirs – this is also a chance to experiment and express your creativity with no strings attached. Among the sheds featured this season are ones built around the themes of hockey, pirates, rodeo and sci-fi, along with a “shed-and-breakfast” and a tiki-bar.

Each episode features two home-grown self-professed shed designers – male and female – who are willing to showcase their ideas and implementation. He Shed, She Shed premiered to an audience of 225,000 viewers and a small share of 0.07%. It`s a curious series, with a fun subject matter spotlighted, but whether the program has enough momentum to be picked up for renewal remains to be seen. Please stay tuned for further announcements, and we`ll be sure to inform you of the latest developments.

Subscribe to receive news and updates when a show is renewed or canceled. You will receive an automatic email when theHe Shed She Shed season 2 Episode 1 release date is officially announced.

Share this with friends:
ReleaseDate.show » Release » FYI is yet to renew He Shed She Shed for season 2
Related Serial
When Will