This article has the most up-to-date info on the status of Join or Die with Craig Ferguson season 2 as we continuously monitor the news to keep you in the know. History Channel is yet to make a decision on its future. Subscribe to our automatic updates below. 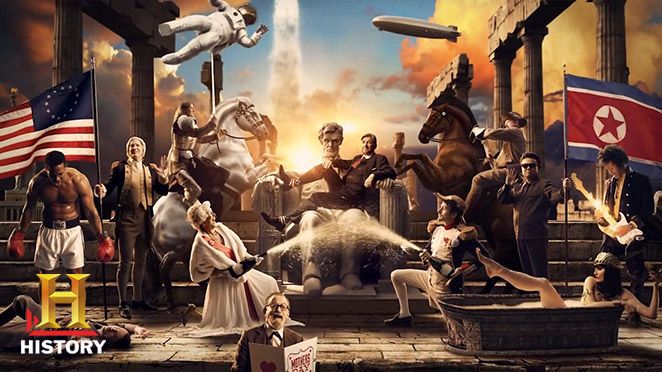 Join or Die with Craig Ferguson is a brand new US panel television show airing on History Channel since February 18, 2016. It`s hosted by Scottish-American comic Craig Ferguson, who has left his Late Late Show on CBS, which he`s hosted for just under a decade, in December 2014. The show features a panel of his guests – comedians, actors and academics who reflect on a number of off-beat and provocative historical subjects. The series is produced by Comedy Dynamics, Green Mountain West and Lionsgate TV.

The freshman season guest list includes many celebrities, among them Jay Leno, Lisa Kudrow, Courteney Cox, Judd Apatow, Julie Bowen, Jimmy Kimmel, Joel McHale, Jason Biggs and Elijah Wood. Topics include history`s worst medical advice, biggest political blunder, biggest frenemies, worst tyrants, craziest cult and others. Ferguson has revealed in an interview that History Channel seemed like an obvious choice of a platform to land, since it has a very non-specific programming slate, which allows him to undertake subjects ranging from “ancient Egyptian hairstyling techniques to the best bands of the last 40 years”.

The half-hour series premiered to 720,000 million viewers, slumping quickly to 430,000 by the second episode. The first season is currently bound to contain a total of 22 episodes. Will the Join or Die cartoon created by Benjamin Franklin, which is tattooed on Ferguson`s arm and used as the program logo stay on television screens for another season? The prospects are unclear at this point, so please stay tuned for relevant information.

Subscribe to receive news and updates when a show is renewed or canceled. You will receive an automatic email when theJoin or Die with Craig Ferguson season 2 Episode 1 release date is officially announced.

Share this with friends:
ReleaseDate.show » Release » History Channel is yet to renew Join or Die with Craig Ferguson for season 2
Related Serial
When Will

Discovery Channel is yet to renew Rockin` Roadsters for season 2