This article has the most up-to-date info on the status of Breadwinners season 3 as we continuously monitor the news to keep you in the know. Nickelodeon is yet to make a decision on its future. Subscribe to our automatic updates below. 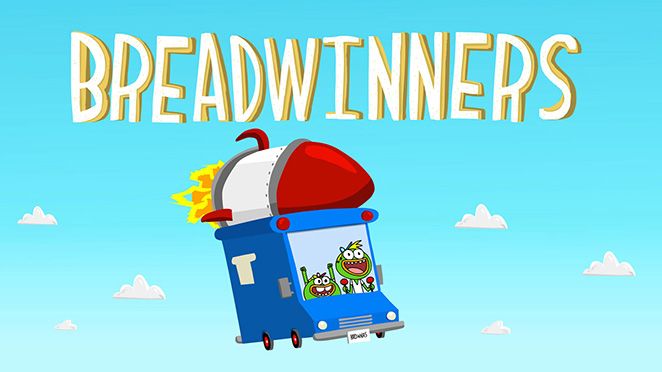 Breadwinners is an animated comedy television series broadcast on Nickelodeon since February 17, 2014. It is created and executive produced by Steve Borst and Gary DiRaffaele and produced by Nickelodeon Animation Studio. Breadwinners was conceived as a one-off, but after the premiere at a short-film festival in New York the creators were contacted by the network. The second season premiered on April 5, 2015 and wrapped up on November 8, 2015.

The main characters are two bread-delivering ducks – the tall and thin Sway Sway and the short and round Buhdeuce. They travel around their planet Pongea in a rocket van, sing songs and get int various trouble.

A rarely seen low rating of 3.3/10 on IMDb is based on 1.3K votes – a significant number to make you wonder. The series` critics pounce on it for the questionable toilet humor, lack of plot and excessive violence. Some, however, find it oddly entertaining, original and visually satisfying, and of course there are those who love it dearly. The ratings, as per the network announcement following the first season`s completion, were excellent, with an average of 1.7 million viewers ver episode, and, moreover, Breadwinners has become the top-rated program in the 2-11 demo. It seems that the show`s fans are more numerous than its opponents, or at least numerous enough to keep the show afloat. Stay tuned, and we will inform you of a renewal or cancelation decision as soon as it is made by the network.

Subscribe to receive news and updates when a show is renewed or canceled. You will receive an automatic email when theBreadwinners season 3 Episode 1 release date is officially announced.

Share this with friends:
ReleaseDate.show » Release » Nickelodeon is yet to renew Breadwinners for season 3
Related Serial
When Will

Nickelodeon has officially renewed School of Rock for season 3