This article has the most up-to-date info on the status of Redneck Island season 6 as we continuously monitor the news to keep you in the know. CMT is yet to make a decision on its future. Subscribe to our automatic updates below. 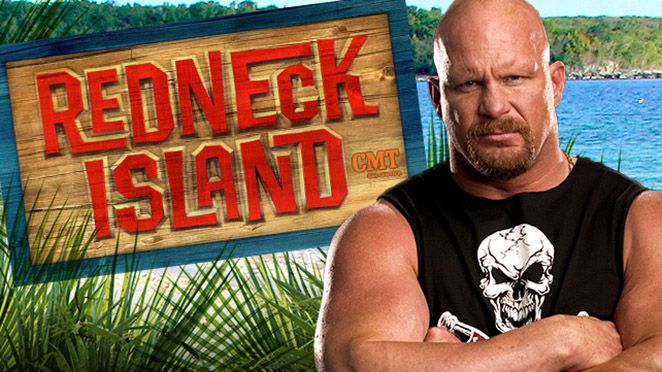 Redneck Island is reality competition television series that`s been on the air since 2012 on CMT. 51 Minds Entertainment is behind the production, with Cris Abrego, Steve Austin, Jayson Dinsmore Melanie, Clay Newbill and Matt Westmore serving as executive producers. The current season premiered on January 28, 2016 and is presented by wrestling icon Steve Austin, with TV personality Melissa Rycroft as a co-host.

The series portrays stranded contestants on a deserted island who have to compete for food and immunity from elimination. The participants are divided into team of two – a man and a woman on each team. There are 24 contestants to begin with, and over the ten episodes of this season we will see them compete for the $100,000 cash prize. This time half of the contestants are veterans, and half are rookies.

The ratings for Redneck Island are currently around 400,000 viewers per episode and a 0.2 share in the 18-49 demographic, numbers that are not particularly impressive. The first season averaged under 1.5 million viewers, and the ratings took a natural downward slide since. Will the current season score high enough ratings to stay afloat? Or will this be the last season of the series? We should find out soon enough, and will keep you posted as soon as the news are out.

Subscribe to receive news and updates when a show is renewed or canceled. You will receive an automatic email when theRedneck Island season 6 Episode 1 release date is officially announced.

Share this with friends:
ReleaseDate.show » Release » CMT is yet to renew Redneck Island for season 6
Related Serial
When Will

TBS officially renewed Wrecked for season 2 to premiere in 2017

The release date for Wrecked season 2 — PendingThis article has the most up-to-date info on the status of Wrecked season 2 as we continuously monitor the news to keep you in the know. TBS has officially renewed the series for another season…