This article has the most up-to-date info on the status of Wild Things with Dominic Monaghan season 4 as we continuously monitor the news to keep you in the know. Channel 5 is yet to make a decision on its future. Subscribe to our automatic updates below. 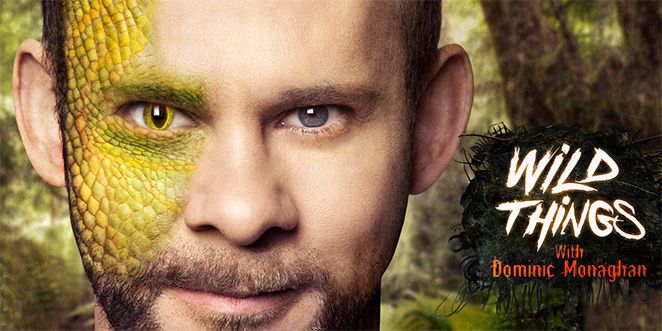 A popular wildlife documentary television series airing on Chanel 5 and BBC America, Wild Things with Dominic Monaghan is currently in its third season, which has aired on January 27, 2016. The series is executive produced by Dominic Monaghan and Dave Brady, presented by Monaghan and produced by BBC Worldwide. It originally premiered in the US on January 22, 2013 with eight one-hour episodes, while the second season episode order was increased to ten.

Every episode portrays Monaghan traveling to a new exotic location looking for “some of the most dangerous and elusive creatures known to men”. Surely enough, he finds them, and each episode is dedicated exclusively to one such creature. The locations include, among others, Guatemala, Ecuador, Namibia, Laos, Brazil, Zambia and Japan. Among the unusual creatures are a giant centipede, giant Malaysian hone bees, ghost bat and lemur leap frog.

The series has been nominated for the Outstanding Unstructured Reality Series Emmy and Best Reality Series at the 3rd Annual Critics Choice Awards. Dominic Monaghan, the host of the series is universally praised for his natural style that stems from the fact that he is pursuing his real-life interest, as well as his ability to improvise and deliver important information in an exciting manner. The series has very positive reviews, and scores of 74% on Metacritic, 8.5/10 on IMDb and a whooping 100% on Rotten Tomatoes. A renewal seems to be imminent for this show that`s delivered with rare sincerity, and we will keep you updated as any news becomes available.

Subscribe to receive news and updates when a show is renewed or canceled. You will receive an automatic email when theWild Things with Dominic Monaghan season 4 Episode 1 release date is officially announced.

Share this with friends:
ReleaseDate.show » Release » Channel 5 is yet to renew Wild Things with Dominic Monaghan for season 4
Related Serial
When Will

SBS is yet to renew Unplanned America for series 4

The release date for Unplanned America series 4 — PendingThis article has the most up-to-date info on the status of Unplanned America Series 4 as we continuously monitor the news to keep you in the know. SBS is yet to make a decision on its future.…