This article has the most up-to-date info on the status of Mountain Goats Series 2 as we continuously monitor the news to keep you in the know. BBC One is yet to make a decision on its future. Subscribe to our automatic updates below. 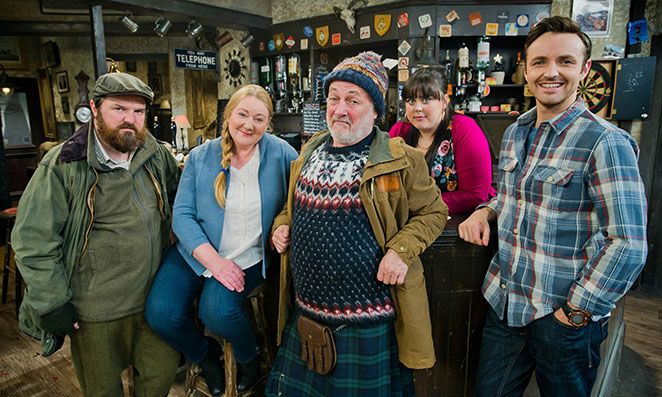 Mountain Goats is a British classic sitcom series about a family of Mountain Rescue volunteers. Filmed in front of a live studio audience, the new comedy premiered on BBC One on August 14, 2015.

Set against a stunning backdrop of Glencoe hills in the Highlands of Scotland, the old-fashioned comedy series centers around a ragtag group of kilt-wearing rescue volunteers. Fighting disaster at every turn, the gang tries to save walkers, climbers, dogs and quite frequently even them-selves. In series 1 the audience is introduced to Jimmy who is struggling to find a home after burning down his house, and Conor trying desperately to escape the advances of his overbear-ing mother. While not saving themselves or others, the friends hang out and drink copious amounts of alcohol at a local pub known as the “The Old Goat”.

Originally titled “Miller’s Mountain”, the show stars Jimmy Chisholm, Kevin Guthrie, Sharon Rooney, Kathryn Howden and David Ireland. Written by Donald McLeary and produced by BBC Scotland and BBC In House Comedy, Mountain Goats is the first project to actually land a tele-vision series order after being piloted as part of the BBC’s Comedy Playhouse Season. The se-ries is produced by Owen Bell, directed by Matt Lipsey, and executive produced by Steven Canny and Ewan Angus. The network has not released any announcements regarding a possi-ble renewal for series 2.

Subscribe to receive news and updates when a show is renewed or canceled. You will receive an automatic email when theMountain Goats Series 2 Episode 1 release date is officially announced.

Share this with friends:
ReleaseDate.show » Release » BBC One is yet to renew Mountain Goats for Series 2
Related Serial
When Will