This article has the most up-to-date info on the status of Wicked Offer Season 2 as we continuously monitor the news to keep you in the know. The CW is yet to make a decision on its future. Subscribe to our automatic updates below. 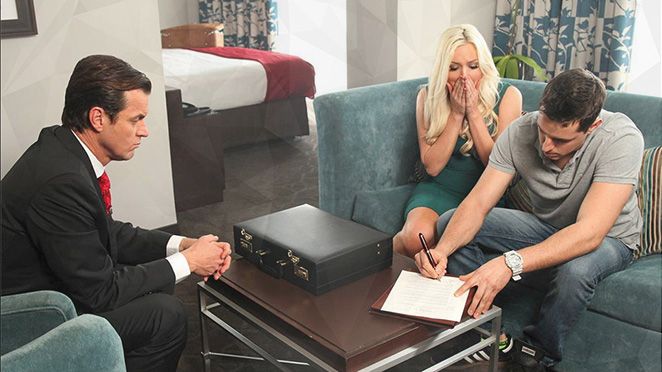 A Wicked Offer is an American reality television competition in which couples must complete controversial tasks to earn cash prizes. Hosted by legal analyst Matthew J. O’Connor and produced by T Group Productions, season one of the series premiered on The CW on August 5, 2015.

A Wicked Offer follows couples who need help turning their dreams into reality. Presented with a series of Faustian bargains that push moral and ethical boundaries, they must decide to complete scandalous and controversial tasks involving their unsuspecting friends, families and co-workers to win cash prizes.

In the season premiere, titled “When Kush Comes to Shove”, soon-to-be-married Jessica and Rod are presented with two offers: receive $10K for replacing Jessica’s sister as the maid of honor with her new ‘best friend’, or get $15K if they convince their entire wedding party to pose for a wedding portrait naked. There is a caveat — the couple cannot tell anyone that they are making these requests for a financial reward.

Thus far reviews and ratings have been mixed. Season 1 of A Wicked Offer opened to just over half a million viewers and has seen a steady drop over the course of eight episodes. While The CW has not made any announcements regarding a possible comeback for another season, ratings are what will ultimately determine the show’s fate. Viewers will need to stay tuned to see whether A Wicked Offer will be picked up for season 2.

Subscribe to receive news and updates when a show is renewed or canceled. You will receive an automatic email when theWicked Offer Season 2 Episode 1 release date is officially announced.

Share this with friends:
ReleaseDate.show » Release » The CW is yet to renew Wicked Offer for Season 2
Related Serial
When Will

Up TV has officially renewed Jo Frost: Nanny on Tour for season 2