The release date for Race to Escape Season 2 — Pending

This article has the most up-to-date info on the status of Race to Escape Season 2 as we continuously monitor the news to keep you in the know. Science Channel is yet to make a decision on its future. Subscribe to our automatic updates below. 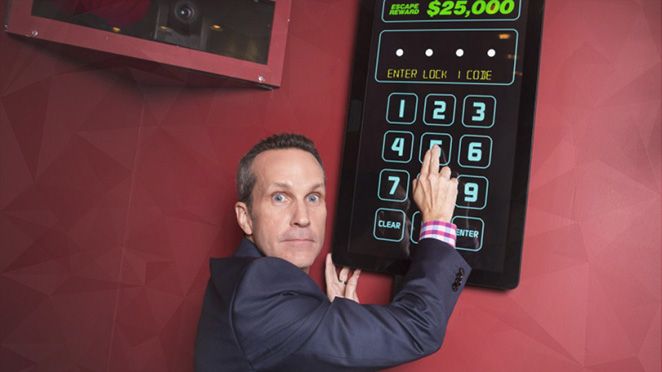 Race to Escape is a new American reality television competition series that follows captive competitors as they attempt to solve mind-bending puzzles and challenges in order to escape a locked room. Produced by Entertainment One in association with Axial Entertainment, the show debuted on the Science Channel on July 25, 2015.

Hosted by a seasoned veteran of late night television, comedian Jimmy Pardo, Race to Escape pits two teams of three competitors against each other as they compete for their freedom and a chance to win cold hard cash. Each episode follows two groups of complete strangers who are locked in two identical themed rooms and have just one hour to solve puzzles and unravel cryptic clues in order to escape. If they do, a $25,000 cash prize awaits them on the other side of the locked door. If they don’t and the clock runs out, they get nothing.

Race to Escape season 1 premiered with a episode titled “The Explorer’s Study” — where two teams are locked inside a lavish 19th century drawing room, filled with books, model ships and old maps. The new game show has averaged just under 400,000 viewers, an increase of nearly 20% for the network’s primetime average year-to-date. But is that enough for viewers to see a Race to Escape season 2? Science Channel has not made any official announcements, but chances are good that we’ll tune in for another season in 2016.

Subscribe to receive news and updates when a show is renewed or canceled. You will receive an automatic email when theRace to Escape Season 2 Episode 1 release date is officially announced.

Share this with friends:
ReleaseDate.show » Release » Science Channel is yet to renew Race to Escape for Season 2
Related Serial
When Will