The release date for The Ranch season 2 — Pending

This article has the most up-to-date info on the status of The Ranch season 2 as we continuously monitor the news to keep you in the know. Netflix has officially renewed the series for another season expected to debut in 2017. To get notified of the exact premiere date – subscribe for updates below. 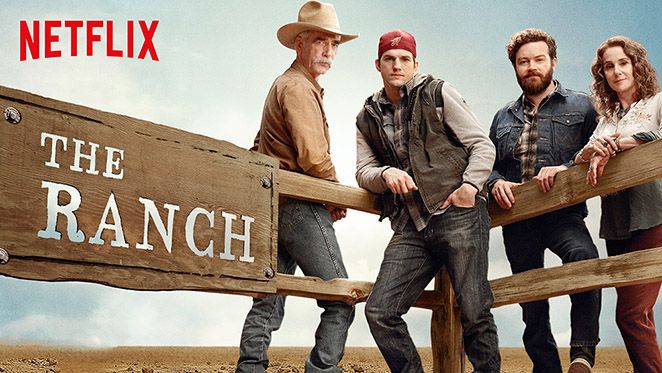 Ashton Kutcher and Danny Masterson, the stars of the popular cult television comedy series That ‘70s Show are back together again on a new film set. This time, the actors will play the main characters in the newest addition to the rapidly expanding Netflix original programming roster – the comedy web series The Ranch, which received a full-season order bypassing the pilot stage.

The storyline of the new comedy series revolves around semi-professional football player Colt (played by Ashton Kutcher), who returns home to Colorado to his brother Jameson “Rooster” (played by Masterson) to help him manage the family-owned ranch. The two actors not only take on the leading roles in the new series, but also serve as executive producers on the show alongside Don Reo and Jim Patterson. The new show also stars Debra Winger, Sam Elliott, Elisha Cuthbert and Kathy Baker. Season 1 was released on Netflix on April 1, 2016.

Season 1 of the new Netflix original comedy series The Ranch was made available in its entirety – 10 episodes, to the Netflix subscribers around the world on Friday, April 1, 2016 at 12:01am PT. According to Deadline, Netflix has ordered 20 episodes of the series (seasons 1 and 2), which will be released in two batches of 10 twice a year. This will become a new model of releasing the original series – both comedies and dramas – that traditionally used to be released as 13-episode installments. Viewers should definitely appreciate this new model, since for many waiting a whole year to watch continuations of their favorite shows became quite unbearable.

Judging by the chemistry the two actors, Kutcher and Masterson, had in That ‘70s Show, we were looking forward to an entertaining, fun and exciting journey. However, the first reviews are rather mixed. While Netflix most likely expected Kutcher to be the main draw for the audience, so far the brilliant performances by Sam Elliott and Debra Winger have garnered the biggest praise. The story seems quite predictable and the show stays well within its sitcom genre apart for some minor swearing and some heated and dramatic dialogue. Overall, the new release feels uninspired and we hope that the creative team will step it up for a second installment. No information yet on the release date of season 2 of The Ranch, so stay tuned.

UPDATED April 30, 2016: Originally, it was reported that Netflix ordered 20 episodes of The Ranch that were believed to be two seasons of the new show. We have just learned that the second installment of 10 episodes that is slated to be released in the fall of 2016 is going to be part 2 of season 1 of The Ranch. At the same time, Ashton Kutcher just posted a video message on his official Twitter account were he appears together with some of his co-stars to announce the official renewal of the comedy series for a second season that is expected to premiere in 2017. The exact release date is yet to be set, so check back with us or subscribe to our updates to get informed by email.

UPDATED July 28, 2016: Netflix`s Kutcher and Masterson-led sitcom The Ranch is bound our way, scheduled to premiere in its entirety on October 7, 2016 at 12:01am PT. The second part of season 1 will chronicle Colt and Rooster`s attempts to prove themselves to their father, in order to earn his trust and in hopes of future partnership. Maggie has her own ideas about the future, and they may not necessarily involve Beau any longer. To complicate matters further, Colt`s forced to make a choice between his girlfriend and his high school sweetheart who is suddenly having doubts about her current fiancé. Will this family ever manage to get things together? Sign up for our automatic updates, receive a reminder of the premiere date a day in advance and don`t miss the release of the Colorado-set series.

Share this with friends:
ReleaseDate.show » Release » Netflix officially renewed The Ranch for season 2 to premiere in 2017
Related Serial
When Will

Netflix officially renewed Love for season 2 to premiere in 2017

The release date for Love season 2 — PendingThis article has the most up-to-date info on the status of Love season 2 as we continuously monitor the news to keep you in the know. Netflix has officially renewed the series for another season expected…