This article has the most up-to-date info on the status of Arthur season 20 as we continuously monitor the news to keep you in the know. PBS has officially renewed the series for another season. To get notified of the premiere date – subscribe for updates below. 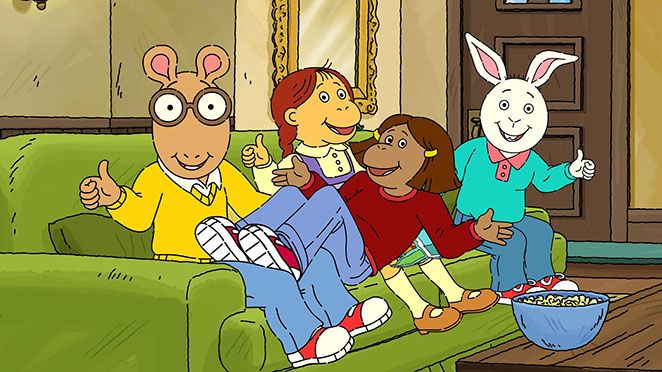 A long-running Canadian/American children`s PBS educational television series, Arthur, has been on the air since 1996. The series is based on the Arthur book series created and illustrated by Marc Brown, developed by Kathy Waugh, and is currently produced by Oasis Animation and WGBH-TV. The current 19th season premiered on January 18, 2016.

The anthropomorphic aardvark Arthur, his relatives and buddies are at the center of the plot. The characters live in a fictional US town, Arthur goes to elementary school and his family faces the usual ups and downs. The show presents situations that are relatable for kids and presents positive behavior models in an engaging, fun, non-patronizing manner. Each half-hour episode contains two 11-minute stories and a live-action segment almost always featuring real children, usually from the Boston area elementary schools relating their real-life, or school experiences to the subject matter of the episode.

Arthur has spawned 3 one-hour-long movies, 3 music albums, interactive toys, an acclaimed website and several video games. It has garnered four Daytime Emmy Awards for Outstanding Children`s Animated Program and George Foster Peabody Award. Arthur`s renewal for seasons 21 and 22, as well as two one-hour long specials, was announced in late 2015. One of the highest-rated children`s shows on PBS, Arthur is also the longest-running children`s animated show in the United States, and has a perfectly good chance to stay on the air for years to come.

Share this with friends:
ReleaseDate.show » Release » PBS has officially renewed Arthur for season 20
Related Serial
When Will