The release date for This Is Not Happening season 3 — Pending

This article has the most up-to-date info on the status of This Is Not Happening season 3 as we continuously monitor the news to keep you in the know. Comedy Central has officially renewed the series for another season. To get notified of the premiere date – subscribe for updates below. 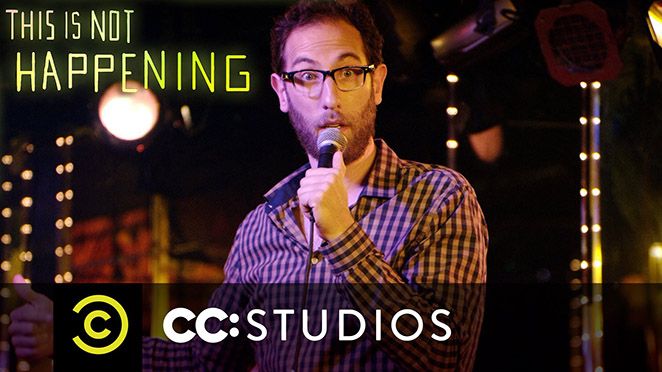 This Is Not Happening is a US storytelling / comedy series airing on Comedy Central since 2015. It is currently in its second season which debuted on February 23, 2016. It`s produced by Comedy Central and executive produced by Eric Abrams, Alisa Chieves, Samantha Saifer and Ari Schaffer.

The series was originally a live show in Cheetahs club in LA, subsequently debuted online, and was then taken up as a television series on Comedy Central, becoming the network`s first show to be transferred to cable from its digital department. Both seasons contain eight episodes each.

The show is hosted by Ari Shaffir and features his comedian friends discussing a specified subject by telling related real-life stories. Among the comics featured in the two seasons of the show are Kurt Braunohler, Joey Diaz, Bobby Lee, Natasha Legero, Kumali Nanjani, Joe Rogan and others. Topics covered have included romance, brain on drugs, travel, psychedelia and crime, among others.

The 8.1/10 score on IMDb and 90% rating on Rotten Tomatoes shows great potential for renewal. Shaffir has expressed great appreciation of being able to provide a platform for talented comics to showcase their gifts at the series` last year`s renewal for the second season. Will there be more of the hilarious and original stories coming after the current season? Sign up for our automatic updates and we will keep you informed on the future of the series as soon as a relevant announcement comes out.

Updated April 1, 2016: Yes, it is happening! This Is Not Happening is coming back for a third season of embarrassing and hilarious real-life stories from Ari Schaffer and his comedian friends. Cheetahs club in Hollywood will continue to be the live venue for the comic showcase. This Is Not Happening has originally debuted as a web project on cc.com, and continues to feature unique material online over the course of the current season. Sign up for our automatic updates and don`t miss the release date announcement.

Share this with friends:
ReleaseDate.show » Release » Comedy Central has officially renewed This Is Not Happening for season 3
Related Serial
When Will