This article has the most up-to-date info on the status of Playing House Season 3 as we continuously monitor the news to keep you in the know. USA Network has officially renewed the series for another season. To get notified of the premiere date – subscribe for updates below. 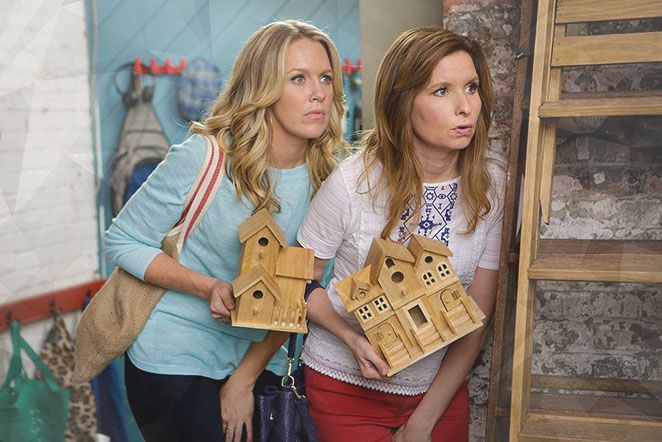 Playing House is an American comedy television series that is produced by Universal Cable Production for the USA Network. Starring Lennon Parham as Maggie Caruso and Jessica St. Clair as Emma Crawford, this series follows the lives of two childhood friends raising a child together in a small Connecticut town of Pinebrook. Season 2 of Playing House aired on August 4, 2015.

In the first season, a mother-to-be Maggie discovers that her husband is having an Internet affair and without thinking too long opens her cards and decides to leave the cheating man. Her best friend Emma, who is working in China at the time, agrees to leave her career and come back to her hometown to help Maggie raise the child. As they prepare for the birth of Charlotte (Maggie’s daughter) and deal with Maggie’s marriage ending, Emma must confront the ghosts of her past in the face of her first love – a local cop Mark.

In season 2 of the series, Maggie and Emma continue to navigate their way as Charlotte’s co-parents, each facing her own challenges and overcoming the obstacles that so often come up in the lives of single women.

Playing House has had very favorable critics’ reviews and rates 7.5 and 8.8 out of 10 on IMDb and TV.com, respectively. Due to the fact that Charlotte is still a newborn, we believe that the writers of the series have an endless supply of ideas for future seasons. Additionally, the series’ social networks pages are full of viewer demands for a third season. As such, we believe that Playing House Season 3 will air some time in 2016.

UPDATED January 17, 2016: A decision has finally been made on the fate of the warmly received comedy series that didn`t fare that well in the ratings department. The USA network announced Playing House`s renewal for a third season due to intense lobbying by Universal Cable Productions, the series` producer. However, the series fared very well on video-on-demand, doubling its VOD audience from season one to season two, but didn`t attract many viewers on linear TV. It remains the last half-hour comedy series on the USA network.

Share this with friends:
ReleaseDate.show » Release » USA Network has officially renewed Playing House for Season 3
Related Serial
When Will

The release date for Bunk’d Season 2 — August 23, 2016This article has the most up-to-date info on the status of Bunk’d Season 2 as we continuously monitor the news to keep you in the know. Disney Channel has scheduled the premiere…

Seeso is yet to renew HarmonQuest for season 2

The release date for Love Child series 4 — PendingThis article has the most up-to-date info on the status of Love Child Series 4 as we continuously monitor the news to keep you in the know. Nine Network has officially renewed the series for…