The release date for Saints and Sinners season 2 — Pending

This article has the most up-to-date info on the status of Saints and Sinners season 2 as we continuously monitor the news to keep you in the know. Bounce TV has officially renewed the series for another season. To get notified of the premiere date – subscribe for updates below. 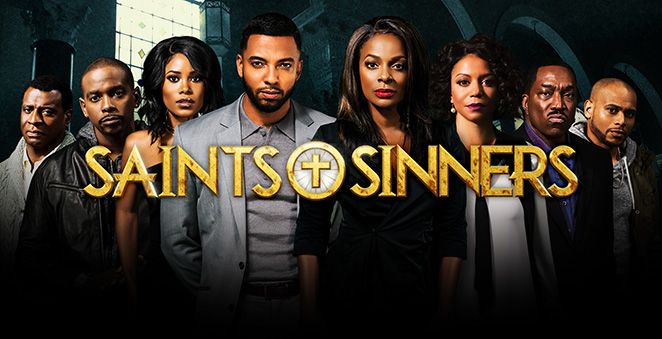 Saints & Sinners is a brand new US prime-time soap opera that premiered on Bounce TV on March 6, 2016. The series is created by T.S. Grant, executive produced by Ty Scott, Ri-Karlo Handy and Elizabeth Keanola and produced by Swirl Films. It is the network`s first original drama series. The first season of Saints and Sinners contains eight episodes and was filmed in and around Atlanta, Georgia.

The series centers around a Southern Baptist church and the community around it that are plagued with crime, lust, greed and lies. When a violent murder stirs the community, the well-hidden secrets may be revealed. The cast includes Vanessa Bell Calloway as Lady Ella Johnson, Gloria Reuben as Pamela Clayborne, Mayor of Cypress, Christian Kayes as Levi Sterling, Jasmine Burke as Dr. Christie Johnson, and others.

Saints and Sinners has an 8.2/10 IMDb rating and has become Bounce TV`s most-watched show ever since the launch of the network in 2011. The program premiered to 1.3 million viewers, with the viewership increasing to 1.5 million by the second week. In view of the record viewership ratings it would be logical to assume that a renewal is most certainly in the cards for the riveting multi-storyline soap opera series. Bounce TV is challenging BET and OWN`s position in the original one-hour series format aimed at African-American demographics, and is very successful in doing that.

UPDATED April 14, 2016: There really was no doubt that Bounce TV`s mega-popular Saints and Sinners series has a bright future, but it is now official: the series is renewed for a second season before the freshman chapter has even wrapped up. The thrilling finale, where the mysterious murder may be solved, is scheduled for April 24, 2016 @ 9pm. Please sign up for our automatic updates and we`ll be sure to notify you as soon as a release date is announced for the second season of Saints and Sinners.

Share this with friends:
ReleaseDate.show » Release » Bounce TV has officially renewed Saints and Sinners for season 2
Related Serial
When Will