This article has the most up-to-date info on the status of Preacher season 2 as we continuously monitor the news to keep you in the know. AMC has officially renewed the series for another season expected to debut in 2017. To get notified of the exact premiere date – subscribe for updates below. 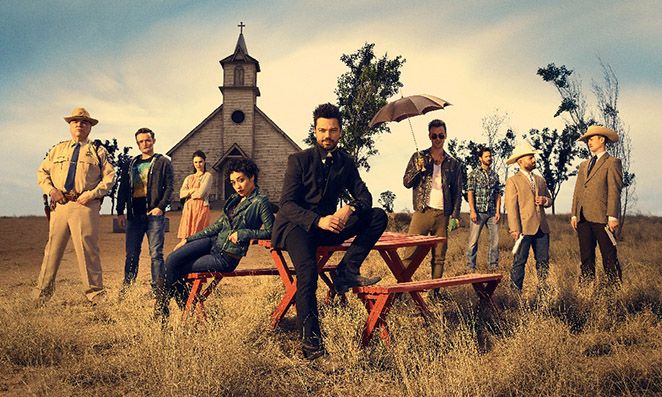 Preacher is a US television series based on a DC Comics Vertigo series Preacher, which was created by Garth Ennis and Steve Dillon. The show is an incredible genre mix, with elements of drama, black comedy, supernatural and horror all present. The series premiered on AMC on May 22, 2016 with a 10-episode freshman season. It is produced by Short Drive Entertainment, Point Grey Pictures, Original Film, Kickstart, AMC Studios and Sony Pictures Television.

The premiere episode begins with various preachers around the globe becoming possessed by alien entities. Among them is Jesse Custer (Dominic Cooper), a Texan preacher with skeletons in his closet, who begins to doubt his faith and asks for a sign from God. The series premiere aired twice, with a week-long break in between, and the second episode is set to air only after the repeat, on June 5, 2016. Among the cast members are Joseph Gilgun (Irish vampire Cassidy), Ruth Negga (Custer`s dangerous ex-girlfriend Tulip O`Hare), Lucy Griffiths (Emily Woodrow, Custer`s right hand), W.Earl Brown (Sheriff Hugo Root), Tom Brooke (Fiore), Anatol Yusef (DeBlanc) and Ian Colletti (Eugene Root).

The series premiered to an audience of 2.38 million viewers, a number that inspires hope in its future. It is also garnering positive scores on review aggregator websites such as Metacritic (76/100) and Rotten Tomatoes (92%). The reviewers praise the casting and the wonderfully refreshing mixture of horror and comedy. The chances of a renewal seem very high at the outset of the season, but we need to see how Preacher fares over the course of the 10-episode run. Stay tuned and we`ll keep you informed.

The first season of AMC’s breakout hit Preacher went out with a bang on July 31, 2016. The season finale enjoyed a 10% rise in viewership from the previous week, drawing 1.72 million viewers, just above the season average of 1.71 million. The DC Vertigo comic-based series ended with an unexpected and satisfying catharsis, although some of the storyline’s loose ends were just blown away along with the town of Annsville. Annsville fell victim to a methane explosion that left no survivors behind, as we are conveniently informed by the newscast, which means that a whole new set of supporting characters will have to be introduced in the already confirmed second season – no more Emily, Donnie, Betsy, Sheriff Root and Odin Quincannon. Moreover, the setting is also going to change radically for the same reason. It will be extremely curious to see what the series’ creators come up with considering the success of the freshman chapter, so please stay tuned, and we’ll inform you of any important developments.

UPDATED June 30, 2016: The popular cult comic-based horror and black comedy series Preacher has received an early second season renewal by AMC. The announcement comes mid-way though its first season run on heels of excellent reviews and high viewership ratings (an average of 3.3 million in the L+3), so it was not at all unexpected. The sophomore season has been commissioned with a 13-episode order, increased from the 10-episode first chapter. The upcoming season is scheduled to bow in 2017. Meanwhile enjoy the rest of the first season, and sign up for our updates so as not to miss Preacher season 2 release date info.

Share this with friends:
ReleaseDate.show » Release » AMC officially renewed Preacher for season 2 to premiere in 2017
Related Serial
When Will

TBS officially renewed Wrecked for season 2 to premiere in 2017

The release date for Wrecked season 2 — PendingThis article has the most up-to-date info on the status of Wrecked season 2 as we continuously monitor the news to keep you in the know. TBS has officially renewed the series for another season…