This article has the most up-to-date info on the status of Still Standing season 3 as we continuously monitor the news to keep you in the know. CBC has officially renewed the series for another season expected to debut in 2017. To get notified of the exact premiere date – subscribe for updates below. 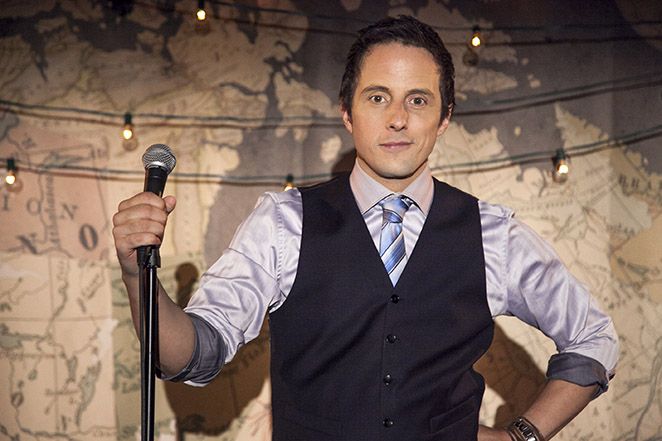 Still Standing is a new Canadian comedy and reality TV series that follows comedian Jonny Harris as he travels across the country entertaining people who’ve maintained a healthy sense of humor in the face of great economic adversity. Produced by Frantic Films, and exec produced by Jamie Brown, Catherine Legge and Jeff Peeler, season 1 premiered on on June 23, 2015 on CBC in Canada. Still Standing season 2 debuted on June 14, 2016.

Still Standing is a comedy show about comedy — a portrayal of one comedian’s adventures in small Canadian towns and the celebration of their residents. Traveling from coast to coast, Jonny Harris immerses himself in local culture to absorb enough material to conjure up a brand new stand-up comedy routine every time. In the first season, Jonny visits Manitou, MB where he befriends a yodeling cowboy, mouths a 10,000 pound Harley Davidson in Lytton, BC, and is a guest in Rowley, AB, a town of eight people (six when winter rolls around), among other places.

The current second season features Harris visiting the towns of Skiegate, BC, Vanastra, ON, Georgetown, PEI and Telkwa. Reviews and ratings have been very positive since the show premiered last summer, so it was not a surprise that the network decided to greenlight a second season. Still Standing has a 7.9/10 IMDb score and Jonny`s thoughtful insight is much appreciated by the audience. Steering away from familiar routes, Jonny Harris explores places you would never otherwise see on television in a funny and heartwarming manner, and we sincerely hope that this positive and upbeat show will be renewed further. However, there have been no announcements so far, so please stay tuned for relevant news.

UPDATED July 20, 2016: The second season of Still Standing is still enjoying its successful current broadcast on Tuesday nights, meanwhile, the CBC network has already renewed the program for a third season, set to air in 2017. Thirteen half-hour episodes have been commissioned for the upcoming season, where Jonny Harris will continue to veer off the main roads in search of small tightly-knit communities, dive right into their lives and subsequently perform a new comedy routine on his every stop for the residents based on his experience there. Sign up for our automatic updates, and we`ll drop you a notification when a release date is set for Still Standing season 3.

Share this with friends:
ReleaseDate.show » Release » CBC officially renewed Still Standing for season 3 to premiere in 2017
Related Serial
When Will

The release date for Back Roads series 2 — PendingThis article has the most up-to-date info on the status of Back Roads Series 2 as we continuously monitor the news to keep you in the know. ABC (AU) has officially renewed the series for another…

ABC is yet to renew Last Man Standing for Season 7