This article has the most up-to-date info on the status of Fuller House season 2 as we continuously monitor the news to keep you in the know. Netflix has officially renewed the series for another season. To get notified of the premiere date – subscribe for updates below. 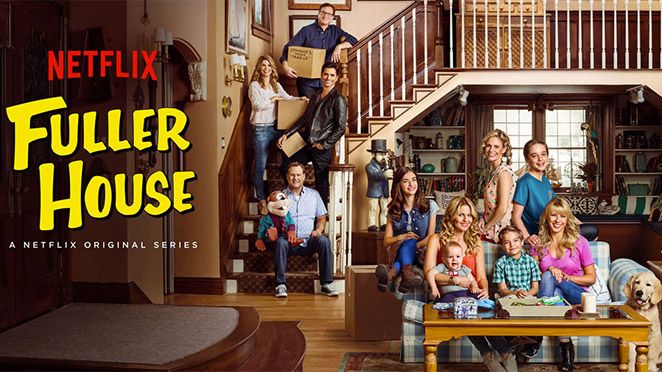 Netflix continues to surprise and delight millions of its subscribers by endlessly expanding its original programming. Fuller House is the newest addition to the top-rated and widely praised TV shows released by the streaming giant in the recent years. The new comedy series is a continuation of the long-running and multiple award-winning fan favorite sitcom Full House that had been broadcast on the ABC network from 1987 to 1995. The sequel was developed by the creator of the original sitcom, Jeff Franklin who also headed the writing team for the show and served as executive producer together with Robert L. Boyett and John Stamos. The production of the new comedy series was undertaken by Jeff Franklin Productions, Miller/Boyett Productions in collaboration with Warner Horizon Television. The highly anticipated season 1 of Fuller House was released on Netflix on February 26, 2016.

The storyline of the sequel continues in San Francisco and centers on D.J. Tanner-Fuller as Candace Cameron Bure reprises her original role. D.J.’s life has changed a lot since the original series wrapped up – she is now a veterinarian, a widow and mother of three. Other returning original cast members include Jodie Sweetin, Andrea Barber, while John Stamos, Dave Coulier and Lori Loughlin all make guest appearances.

Season 1 of Fuller House, which consists of 13 half-hour episodes, was released in its entirety on the online streaming service provider Netflix on Friday, February 26, 2016. The first reviews are very promising and the show currently has a score of 8 out 10 on IMDb. It seems a little ironic, considering the fact that the series almost didn’t happen – it took Jeff Franklin more than eight years to take it off the ground since he first pitched the idea to various networks back in 2007. This actually speaks again to the incredible sixth sense Netflix has for picking the winners: in the recent few years almost every original show released by the streaming monster has been embraced and savored by critics and audiences around the globe. Full House’s sequel brilliantly appeals to the nostalgic feelings of viewers who were glued to their television screens for years back in the 90s watching the original series and then were left hanging when the show ended without much closure. It is a tough call making sequels, because the expectations are always very high, but this one truly hits the spot. The cast members are already reminiscing about the filming process and anxiously waiting for a renewal decision. Judging by the reviews, the series would most likely get enough traction to continue on, but let’s wait for the formal announcement from Netflix about Fuller House season 2.

UPDATED March 2, 2016: It has been just a few days since the triumphant reincarnation of the cult TV show Full House by Netflix was released online, and we have just learned that the streaming company has officially renewed its newest original family comedy series Fuller House for a second season. As you know, Netflix does not make its ratings public, but we always had a good feeling about the new show that has managed to stir quite a storm on social media. To most critics the renewal decision also seemed imminent. Now that a second chapter is a go, many fans along with the series creator Jeff Franklin will be hoping to see the Olsen twins return as well some other characters. The release date and plot details are not being disclosed at this point, so check back with us for the latest developments.

Share this with friends:
ReleaseDate.show » Release » Netflix has officially renewed Fuller House for season 2
Related Serial
When Will