This article has the most up-to-date info on the status of The Real O`Neals season 2 as we continuously monitor the news to keep you in the know. ABC has scheduled the premiere date for a new season for October 11, 2016. 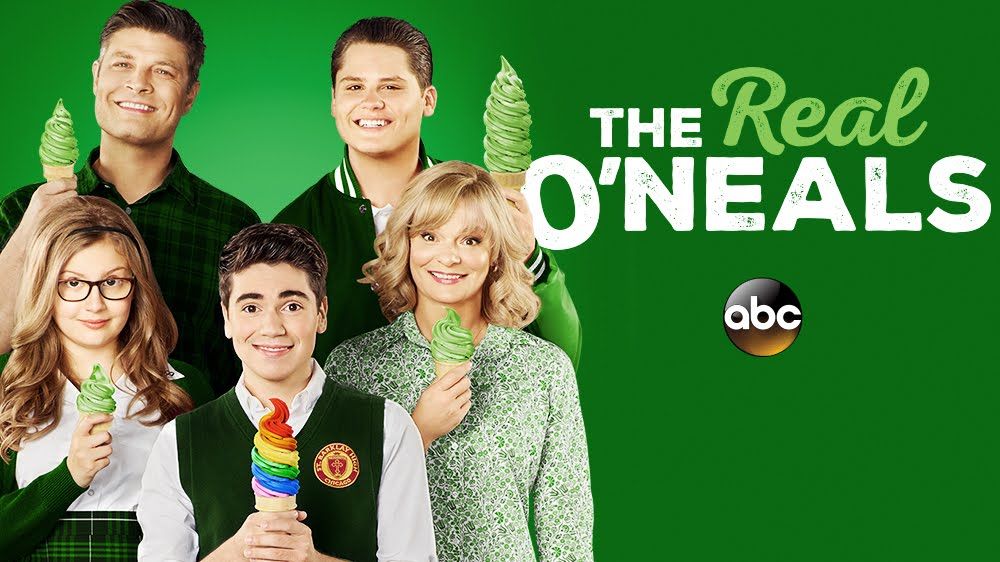 The Real O`Neals is a brand new US sitcom television series that premiered on ABC on March 2, 2016. It is based on the idea by Dan Savage, created by Joshua Stermin and Jennifer Ventimilla, and produced by Windsor and Johnson Productions, di Bonaventura Television and ABC Studios.

The show chronicles the life of a conservative Catholic family in Chicago. The Real O`Neals focuses on how the family bonds are affected by revelation of personal secrets. The family is a traditional and a close-knit one, and when their young son comes out as a gay man, it`s not a very easy idea for the family members to digest. Everyone else also has issues that are revealed over the course of the series, and the way this family deals with some very poignant questions that life poses them with is very realistic and heart-warming.

The Real O`Neals raised some controversy for its depiction of the Catholic church, when some religious conservatives protested against the series, so the ABC network was forced to make some adjustments and steered the plot more towards the crazy-family comedy style. The sitcom got off to a solid start, with 6.3 million viewers, and a 1.8 rating and a share of 7 in the 18-49 demographic. Two episodes later The Real O`Neals demonstrated an excellent viewer retention rate of the preceding Fresh Off the Boat series and ranked #2 comedy series in both total viewership and 18-49 demo viewing on Tuesday. It definitely is a perfect candidate for renewal, all we have to do now is keep an ear out for a network announcement.

The 13-episode freshman season of The Real O`Neals has concluded on May 24, 2016. The prom-centered season finale appropriately featured prom-related troubles, joys and commotion. Kenny is concerned with choosing the best candidate to ask to the prom, Jimmy and Kenny are both trying to think up the ideal “prom-posal” for their prospective dates. Shannon pretends to despise the very idea of a prom, but can Pat convince her to go? The renewal decision was not immediately obvious, since the series lost almost 30% of its premiere audience by the season finale (6.33 vs. 4.21 million viewers), but ABC gave it another chance to grow and develop. And a bonus on top of the renewal of the sitcom for the second season – the fans won`t need to wait 10 long months for the premiere of the upcoming season. Unlike the first installment, which premiered at mid-season, the second season of The Real O`Neals is a significant part of ABC`s fall 2016 lineup. It will be the final part of the Tuesday night comedy block, preceded by The Middle, American Housewife and Fresh Off The Boat. So now fans just need to get through the summer without their O`Neals fix.

UPDATED May 13, 2016: On a day of cancelation and renewal announcements ABC has axed a significant number of its programs, but renewed The Real O`Neals for a second run. The midseason comedy has been delivering solid ratings, with an average audience of 3.5 million viewers and a 1.0 demo rating, so the renewal was well expected. Stay tuned for release date announcements, and you keep it real, O`Neals!

UPDATED July 20, 2016: The Real O`Neals, your favorite Chicago family has got the release date confirmed for its highly anticipated second season. Their hilarious and heartwarming story is set to continue on Tuesday, October 11, 2016 at 9:30pm on as part of ABC Tuesday night comedy block. The wave of popularity probably pushed the series to an earlier premiere date, compared to the first season which was launched mid-season. Sign up for our automatic updates, and we`ll be sure to remind you of the premiere date one day in advance.

This article has the most up-to-date info on the status of Bordertown season 2 as we continuously monitor the news to keep you in the know. Unfortunately, FOX has officially canceled the series. There will be no season 2.About the seriesBordertown…