This article has the most up-to-date info on the status of Kingdom season 3 as we continuously monitor the news to keep you in the know. Audience Network has officially renewed the series for another season expected to debut in Fall 2016. To get notified of the exact premiere date – subscribe for updates below. 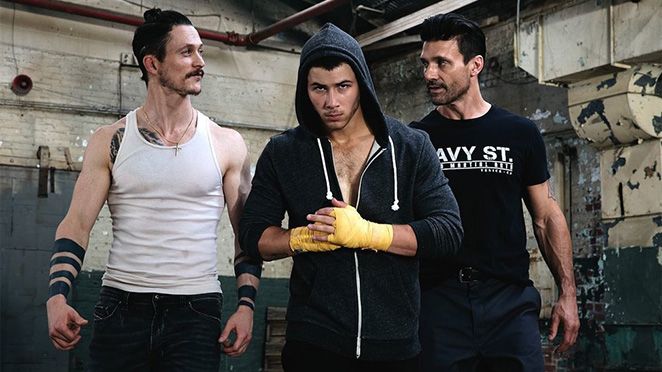 Kingdom is an American drama television series aired on the DirecTV`s Audience Network since October 8, 2014. The show`s storyline revolves around a family-owned Mixed Martial Arts gym in California. Created and executive produced by Byron Balasco, the show has already been broadcast in several South American countries, Canada, Australia, Sweden and New Zealand.

The series has a curious mixture of emotionally challenging relationships and downright gritty action. The men and the women in this cruel macho world have to be strong in more ways than one – and they certainly are. Everyone here has a history, everyone is tough - and most know what they want out of life. Tough gym owner and trainer Alvey Kulina (Frank Grillo) holds Navy Street together with help from his girlfriend Lisa Prince (Kiele Sanchez), a powerful and complex character. Ryan Wheeler (Matt Lauria), an ex-con and Lisa`s ex-fiancee adds an edge to Alvey and Lisa`s relationship as he trains in their gym. Alvey`s ex-wife and two sons with their own variety of personal problems further add to the complexity of the situation. This is all before we even start to mention the blood, sweat and tears pouring offscreen as the fighting begins.

The Kingdom was renewed for two more seasons just 10 days into the first season, as the critical reviews and viewer response have been generally positive. The ten already commissioned episodes are set to be broadcast in 2016. Will troubled family ties be healed? How will the fighters do in the competitions? Fans may find out soon enough.

The 20-episode second season of Audience Network’s MMA drama Kingdom has bowed out on August 3, 2016. The heartbreaking season finale titled “No Sharp Objects” portrayed Jay grieving over Ava’s unexpected death, and while he does not seem emotionally stable enough to face Ryan in a fight, there is no way around it. So it goes, Ryan wins, taking Jay down by the fourth round, but Alvey is not happy about this victory. Ryan and Lisa end up in her motel room, having an emotional conversation, revealing secrets about their past, and eventually making out. Critical acclaim for the show has been overwhelmingly positive, and viewers are greatly enjoying Kingdom as well. The gritty drama, the complex characters and their intricate relationships are truly mesmerizing to follow. The third season of the show is likely to premiere by October 2016, and we’ll be sure to inform you of the release date as soon as it is announced.

UPDATED March 3, 2016: A first 10-episode installment of the current season of the MMA drama series Kingdom concluded on the AT&T’s Audience Network back in December. In the mid-season finale Ryan and Jay both won their championship belts and it looks like next they will have to fight each other. Tune in to watch what happens when the second 10-episode half of the sports drama series returns to the small screen on Wednesday, June 1, 2016.

Share this with friends:
ReleaseDate.show » Release » Audience Network officially renewed Kingdom for season 3 to premiere in Fall 2016
Related Serial
When Will

The release date for Marcella series 2 — PendingThis article has the most up-to-date info on the status of Marcella Series 2 as we continuously monitor the news to keep you in the know. ITV has officially renewed the series for another season. To…