The release date for You’re the Worst Season 4 — Pending

This article has the most up-to-date info on the status of You’re the Worst Season 4 as we continuously monitor the news to keep you in the know. FXX has officially renewed the series for another season expected to debut in 2017. To get notified of the exact premiere date – subscribe for updates below. 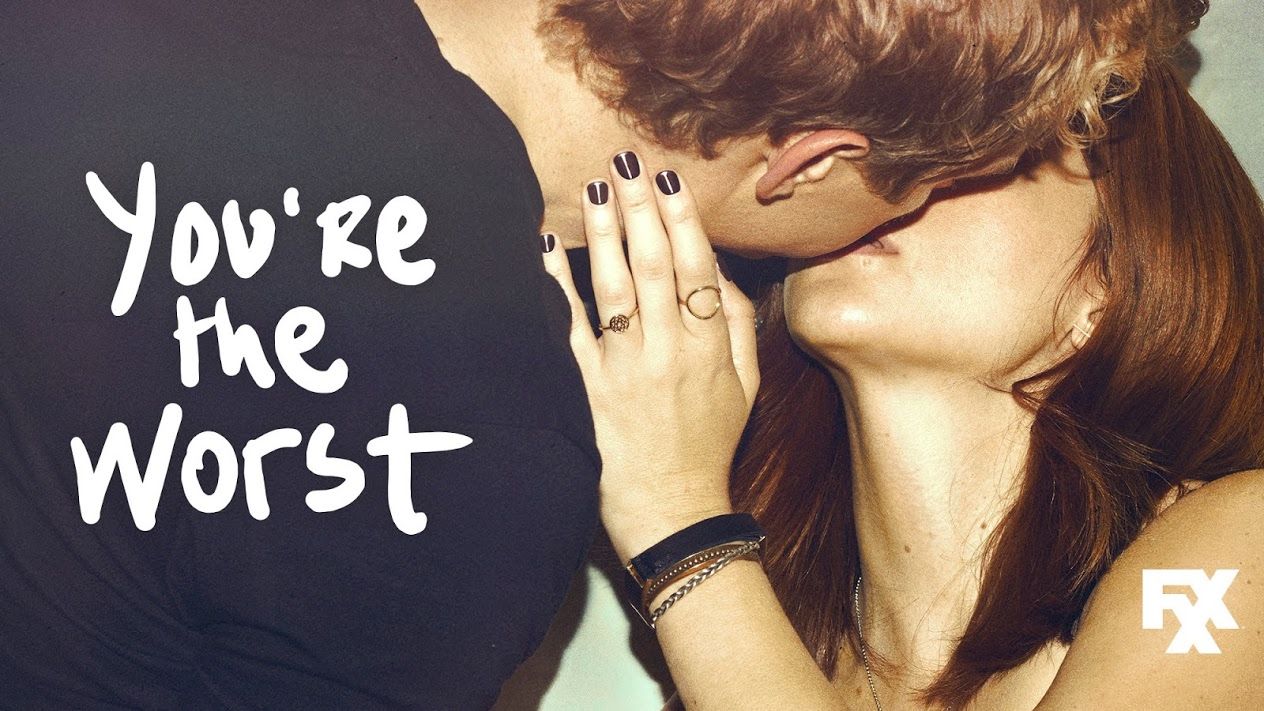 You’re the Worst is an American comedy series that follows a self-involved writer and self-destructive PR executive in their attempt at having a relationship. The series premiered on July 17, 2014 on the FX Network, and was later renewed for season 2 which kicked off on its sister channel, FXX on August 31, 2016.

In You’re the Worst, Jimmy (Chris Geere) is a selfish and insensitive writer, and Gretchen (Aya Cash) is a PR executive who is cynical and prone to self-destructive tendencies. During season 1, the audience followed the couple’s misadventures in life, love and romance. In season 2, which premiered on September 9, 2015, Jimmy and Gretchen’s relationship is put to the test when they decide to move in together. Mortally afraid of turning into dull adults with boring lives, the couple entangle themselves in their own drama to avoid the real issues.

Created by Stephen Falk (Orange is the New Black), the series has returned to rave reviews, reporting a 100% approval rating on the Rotten Tomatoes. The show has not seen a very inspiring ratings trend – in fact, the numbers have been declining over the second season – but the channel was counting on the series` creator Stephen Falk to take it to new heights – and he did, if reviews are any indication. The show began exploring more serious territory of emotional maturity and responsibility, and is once again garnering universal acclaim. However, the viewership ratings are still disappointing. Season 3 debut was watched by 0.347 million viewers with 0.17 demo rating, but by the third week the numbers slumped to 0.269 million and 0.17 in the demo. Even though the reviews are excellent, the ratings may endanger the show’s future. FXX has not issued any statements regarding a possible renewal of You’re the Worst for a fourth season yet, so please stay tuned for network announcements.

The 13-episode third season of You`re the Worst has wrapped up on FXX on November 16, 2016. The season finale almost allowed Gretchen and Jimmy to get engaged, but, since fans might not have tolerated anything of the kind, Jimmy was seen driving away from Gretchen right after his seemingly perfect proposal was accepted, leaving her stranded and the situation up in the air. Elsewhere, Lindsay is divorced, yet optimistic, Jimmy finishes the novel, and Edgar lands an excellent job as a writer for Doug Benson`s sketch show. Merely 0.137 million viewers tuned in to see the final episode, which is pathetically close to the season low of 0.115 million, and significantly lower than the season premiere, which drew 0.347 million fans. In any case, the show has already been renewed for a fourth season, which is slated to premiere in 2017, so please stay with us for the latest news.

UPDATED September 29, 2016: Just under a month after a strong season premiere, FXX’s hit comedy series You’re the Worst has been renewed for a fourth season, slated to air in 2017. The show was renewed despite the slowly declining ratings, most likely due to the fact that the viewers’ support is still strong and the critics are still raving about You Are the Worst. Stay tuned, and we will be sure to bring you the latest news on the upcoming season of the program.

Share this with friends:
ReleaseDate.show » Release » FXX officially renewed You’re the Worst for Season 4 to premiere in 2017
Related Serial
When Will

This article has the most up-to-date info on the status of Penny Dreadful season 4 as we continuously monitor the news to keep you in the know. Unfortunately, Showtime has officially canceled the series. There will be no season 4.About the show and…

Channel 4 is yet to renew The Circuit for series 2

The release date for The Circuit series 2 — PendingThis article has the most up-to-date info on the status of The Circuit Series 2 as we continuously monitor the news to keep you in the know. Channel 4 is yet to make a decision on its future.…