This article has the most up-to-date info on the status of Black Ink Crew Season 5 as we continuously monitor the news to keep you in the know. VH1 has scheduled the premiere date for a new season for January 18, 2017. 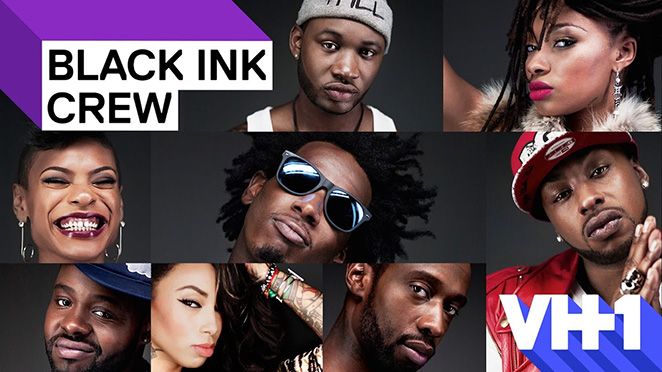 Black Ink Crew is an American reality series broadcast by the VH1 channel in the US. Produced by Dan Cesareo, Doug DePriest, Ken Martinez and 4 others, Black Ink Crew first premiered on VH1 on January 7, 2013 and is presently in its fourth season, which premiered on April 4, 2016.

Black Ink Crew chronicles the lives, loves and rivalries of staffers at a Harlem tattoo parlor called Black Ink, located at 113th St. and Lennox Ave in Harlem, New York. The employees are a tight, but dysfunctional group of friends who eventually grow to become a family. For most of them, Black Ink is the first legitimate job off the streets and is the place where they can turn their lives around. The main cast members are Ceaser, Dutchess, Puma, Sassy, O’Shit, Sky, Ted and Walt and their place of work is one of the most famous tattoo shops in the US which attracts hip-hop stars and athletes as clients.

Season 4 of Black Ink Crew premiered on the VH1 channel in the United States on April 4, 2016 to 2.21 million viewers. Much like with the third season, the series continues to enjoy a pretty solid viewership, which means that there are plenty of fans out there who are ready to watch another season. Nevertheless, VH1 has not made any statements about a possible release of season 5, so we`ll monitor network announcements closely and inform you promptly when information becomes available.

On June 27, 2016 the final episode of Black Ink Crew season 4 has aired on VH1, drawing 2.18 million viewers to their screens. The overall ratings for the season are excellent, perfectly on par with the preceding season, and higher than the first two installments. It is a rare instance of a program that gains audience with time. Season finale “Southbound and Uptown” featured snowtubing fun for the crew of the shop, where Donna and Dutchess could not avoid a fight, a party organized by Ceaser to welcome everybody to the new Black Ink shop. Elsewhere, drug and alcohol abuse continues to be problematic issues for O`Shit and Donna has to decide on the future with Max. VH1 has yet to decide whether or not fans will see more of the talented tattoo artists and friends on the small screens in the upcoming television season, so please stay tuned and we will continue to bring you the latest news.

UPDATED December 1, 2016: They are baaaack! The fifth season of Black Ink Crew has got its release date confirmed, and is scheduled to air on January 18, 2017. What are your favorite tattoo artists up to? Did Donna manage to become a better person? Did Duchess and Caeser actually break up, as the rumors have it? Did Sky reach any enlightening revelations? How is Ted? We`re in for an interesting season, so don`t miss the premiere with our automatic reminders.