This article has the most up-to-date info on the status of Doc Martin Series 8 as we continuously monitor the news to keep you in the know. ITV has officially renewed the series for another season expected to debut in 2017. To get notified of the exact premiere date – subscribe for updates below. 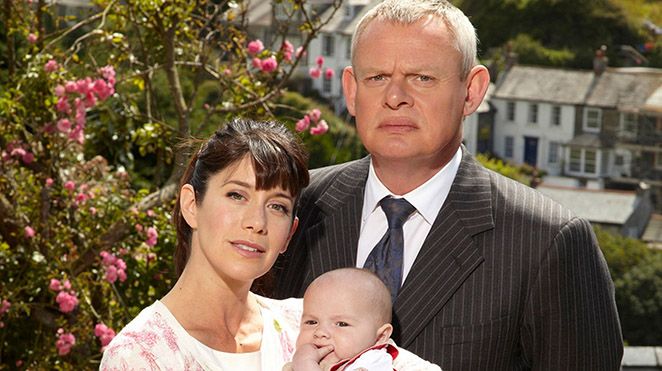 Doc Martin is a British medical comedy and television drama series that chronicles the trials and tribulations of a successful and brilliant surgeon who is forced to give up his craft after developing a fear of blood. Created by Dominic Minghella, the show was originally release on September 2, 2004 and is currently in its seventh season airing on ITV in the U.K.

Set in the fictional seaside village of Portwenn, Doc Martin is filmed on location in the village of Port Isaac in Cornwall, England and stars funnyman Martin Clunes as the brilliant surgeon, Dr. Martin Ellingham. After developing haemophobia — a fear of blood — the successful doctor is suddenly forced to stop practicing surgery. Returning to the sleepy Cornish village of Portwenn where he has spent childhood holidays, Ellingham takes a position as a general practitioner helping the locals who refer to him simply as Doc Martin. Despite his competence as a medical doctor, Ellingham lacks certain social and behavioral skills, often appearing rude and hot-tempered.

The first five series aired between 2004 and 2011 and then went on hiatus for nearly two years. Doc Martin returned to the silver screen in September 2013. Each episode is just under one hour long, and the series airs on odd-numbered years only. Series 7, which premiered on September 7, 2015, brings back the familiar cast of characters — Ellingham’s estranged wife Louisa (played by Caroline Catz), restauranteur Bert Large (played by Ian McNeice), and Aunt Ruth (played by Dame Eileen Atkins), among others.

Series 7 kicks off with an episode titled “Rescue Me” in which Louisa is visiting her mother in Spain to get away from the daily grind and gain some perspective on her marriage. In subsequent episodes Ellingham and Louisa attend therapy together while Mrs. Tishell is surprised when her husband Clive returns and tells her he wants to give their relationship another try. There have been no updates from ITV regarding a possible return of Doc Martin for series 8.

Updated January 20, 2016: The haemophobic Doc Martin is coming back for the another series, most likely in 2017. The renewal of the show for an eighth run was announced by ITV to the crew at a celebration dinner. Ian McNeice, who plays the part of restaurateur Bert Large, reported the news, saying that the cast is thrilled to have another chance with Doc Martin. The ratings for the last season were the best for the program so far, with an average of 7 million viewers per episode, thus a renewal was a more or less expected one.

Share this with friends:
ReleaseDate.show » Release » ITV officially renewed Doc Martin for Series 8 to premiere in 2017
Related Serial
When Will

NBC is yet to renew Maya and Marty for season 2

Sky1 is yet to renew Moone Boy for Series 4

The release date for Moone Boy Series 4 — PendingThis article has the most up-to-date info on the status of Moone Boy Series 4 as we continuously monitor the news to keep you in the know. Sky1 is yet to make a decision on its future. Subscribe to…

BET is yet to renew Zoe Ever After for season 2

The release date for No Offence series 2 — PendingThis article has the most up-to-date info on the status of No Offence Series 2 as we continuously monitor the news to keep you in the know. Channel 4 has officially renewed the series for another…