This article has the most up-to-date info on the status of Scream Season 3 as we continuously monitor the news to keep you in the know. MTV has officially renewed the series for another season expected to debut in 2017. To get notified of the exact premiere date – subscribe for updates below. 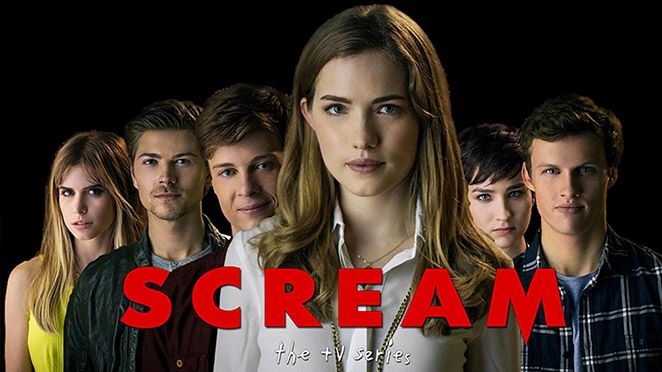 Scream is a new horror mystery TV series that’s an adaptation of the uber popular film franchise of the same name. Produced by Dimension TV and MTV Production Development, the show debuted on June 30, 2015 on MTV in the United States, with season 2 premiering on May 30, 2016.

A group of teenagers in a small town of Lakewood find themselves in hot waters after a cyberbullying video goes viral and instigates a murder that stirs up memories of a crime spree from a distant past. With two old friends struggling to reconnect, the storyline of Scream the TV series takes viewers on a nail-biting adventure where everyone has secrets and everyone tells lies. The series was nominated for three Teen Choice Awards in 2015 but failed to be awarded.

Six new characters are added to the ensemble cast of the thriller series – the two regulars are Zoe, an overachiever with a skeleton in her closet (Kiana Lede) and Gustavo Acosta, an outsider “deeply into horror, serial killers and comic books” (Santiago Segura). The four recurring characters to join the crew are Sheriff Acosta (Anthony Ruivivar), Gustavo`s father, friendly psychology teacher Karen Lang (Austin Highsmith), Eli (Sean Grandillo), Kieran`s cousin who might be not as perfect as he seems and the young and independent Tina Hudson (Karina Logue).

With more than 21 million viewers tuning into the debut season 1 of Scream earlier this summer, MTV jumped on the opportunity to feed the beast by picking up the series for a second season after the first five episodes. The ten episode season also generated another 7.9 million streams across different platforms. However, critics and fans have written mixed, landing Scream in the 48th percentile of freshness on Rotten Tomatoes and just 57 out of 100 on Metacritic. The show’s ability to maintain suspense is what ultimately prompted MTV to renew the series for a second season, and if it manages to compel the viewers in the current chapter, it may very well see a third installment. The viewership, however, is down this season, averaging just over 400,000 viewers for the first three episodes. We will monitor the ratings and keep you informed as to the series` fate.

On August 16, 2016 the 12-episode second season of MTV`s popular thriller Scream has come to a conclusion. The blood-chilling season finale titled “When a Stranger Calls” was seen by an audience of 0.34 million viewers. While the season was deemed uneven by the critics, the last episode was undeniably compelling, referencing previous installments of the cult franchise. It featured the long-awaited revelation of the identity of the killer, Kieran who is alive and in jail in the final episode. Additionally, there is a chance that Brendan James is alive as well, since someone eerily resembling him calls him up in prison. Emma and Audrey are on an eventful adventure in this episode, facing serious danger and becoming close friends in the process. They are also the ones who apprehend Kieran. While there have been no announcements regarding a potential third season, there is a two-hour Halloween special coming up in October 2016, release date TBA. Please stay tuned, and we`ll bring you the latest information.

UPDATED October 12, 2016: Here’s some frightfully wonderful news for you – not just any special, but a 2-hour Scream Halloween special is bound your way on October 18, 2016 at 9/8c. MTV’s hit horror series’ special episode will pick up right where season 2 has left off. Emma and the rest of the gang take a trip to the nightmarish island where Kieran may once again be up to tracking them down. The compellig trailer has already been released to pick the fans’ interest, so tune in and see for yourself – this special is not to be missed. Enjoy!

UPDATED October 14, 2016: Having just announced a Halloween Special episode to be aired on October 18th, the MTV network has delighted the fans of the horror drama series with even more exciting news today – Scream has been officially picked up for a third run! The production of the next chapter will come with major changes as the current showrunners Richard Register and Michael Gans are to leave the series. Their replacement has not been secured yet. While fans are curious to learn any details about new episodes and especially about the fate of Kieran, the creative team is still exploring the myriad of storyline options. No release date has been set yet, so check back with us for the premiere date announcement for Scream season 3.

Share this with friends:
ReleaseDate.show » Release » MTV officially renewed Scream for Season 3 to premiere in 2017
Related Serial
When Will

FOX is yet to renew Scream Queens for Season 3