This article has the most up-to-date info on the status of Suddenly Royal Season 2 as we continuously monitor the news to keep you in the know. Unfortunately, TLC has officially canceled the series. There will be no Season 2. 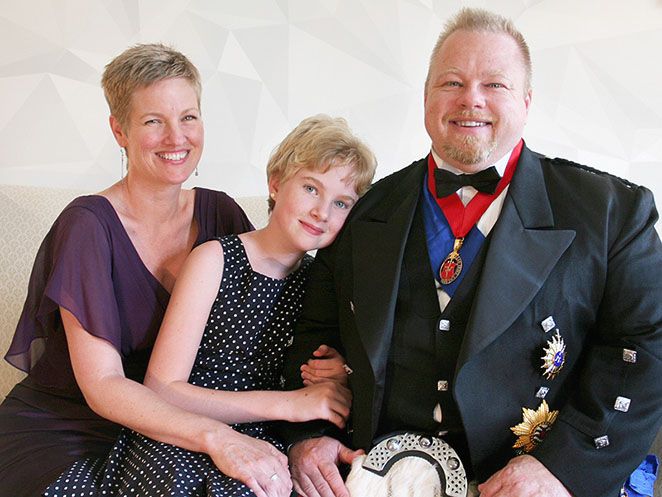 Suddenly Royal is a new American reality series that follows an auto repair advisor on his search for his ancestry. Produced by MAK Pictures, the series premiered on September 9, 2015 on TLC.

Suddenly Royal features the life of all-American blue collar worker David Howe as he and his family embark on a search for his family history online. After discovering royal roots, David takes his wife Pam, and 12-year old daughter Grace, on an adventure of a lifetime — traveling 3,000 miles to unveil what it really means to be a modern-day heirs to the throne of the British Isle of Man.

In season 1, David receives invitations from the Duke and Duchess to attend a royal wedding, and tries to convince the local residents of the Isle that he and his family are also royalty. As David faces the trials and tribulations of winning over the locals, Pam and Grace embrace the unfamiliar world of social elites they have suddenly found themselves in.

Having arrived on the Isle of Man, the cast of Suddenly Royal explores ancient traditions and gets acquainted with their surroundings, and even hires an etiquette coach and royal advisor. Stepping into their rightful roles, they host royal garden parties, participate in the World Tin Bath Championship, and sometimes face challenges like getting lost during an RV tour. Despite their dedication, David, Pam and Grace discover that being a royal is a lot harder than it seems. There have been no announcements from TLC regarding a release date for season 2.

UPDATED May 31.2016: A piece of unfortunate news for the fans of the Suddenly Royal reality series that portrayed the lovable Howe family – the show has been canceled by TLC. David Howe, who has accidentally discovered that he is the heir to the throne of the British Isle of Man, has announced the news in an interview on Manx.com, explaining that he doesn`t see where the series could have gone in the second season, and that it would become repetitive. It`s truly refreshing to see a person who`s not fame-crazed and has a fulfilling life beyond the reality show, so his decision is understandable, although it will be sad for the viewers who have enjoyed seeing David, Pam and Grace on screen.

ITV2 is yet to renew Plebs for series 4

The release date for Plebs series 4 — PendingThis article has the most up-to-date info on the status of Plebs Series 4 as we continuously monitor the news to keep you in the know. ITV2 is yet to make a decision on its future. Subscribe to our…

Up TV is yet to renew Small Town, Big Mayor for season 2

ITV2 is yet to renew Educating Joey Essex for series 3