The release date for F is for Family season 2 — Pending

This article has the most up-to-date info on the status of F is for Family season 2 as we continuously monitor the news to keep you in the know. Netflix has officially renewed the series for another season. To get notified of the premiere date – subscribe for updates below. 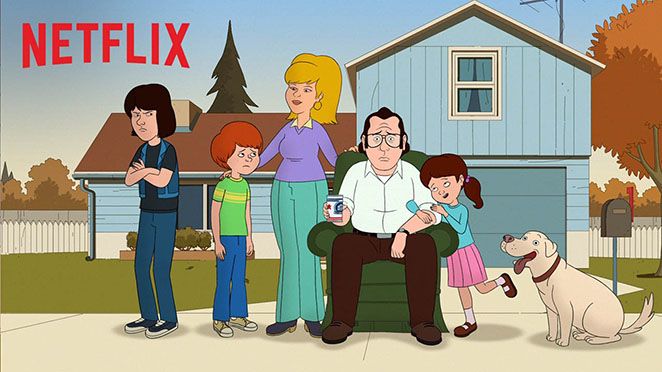 F is for Family is an American animated situational comedy series that is airing its freshman season in full on Netflix on December 18, 2015. The six-part series is co-produced by Gaumont International Television and Wild West Television. It was created and written by stand-up comedian Bill Burr and writer Michael Price, a Simpsons vet.

The series is a family comedy set in the 1970s, when the issues of political correctness were inexistent, you could smoke in an airplane and smack your child. It is based on the comedy and childhood memories of Bill Burr, who`s voicing Frank Murphy, the belligerent father of the lower middle class family, Laura Dern is the voice behind his wife, Sue Murphy, Justin Long`s voice is animating their eldest son Kevin, Haley Reinhart - Bill, the youngest son and Debi Derryberry - their daughter Maureen. Their family life unfolds in the Rust Belt and is as disappointing most of the time as the series title suggests. But they have their moments and at times are even close to being happy.

The show is already deemed fun and promising by the critics, a serialized sequence that has episodes strong enough to stand on their own. The very empathic portrayal of this suburban family`s misery is very touching and relatable. Without the sharp humor F is for Family would have been a very depressing sight, but it offers just the right mixture of funny and distressing. The series is very amusing and should have a bright future to expand on the Murphy family history, their daily toil and the characters who really do touch some strings.

UPDATED April 16, 2016: Excellent news for the fans – the highly anticipated second season of the animated Netflix hit F is for Family has been officially confirmed. The renewal of the series for another chapter of sharp and quirky fun was expected, in light of its mostly positive reviews and high review aggregator scores. Bill Burr has made the announcement yesterday via Twitter. The second season will contain 10 episodes, while the freshman installment only comprised four. Sign up for our automatic updates and receive an e-mail notification of the release date as soon as it is announced.

Share this with friends:
ReleaseDate.show » Release » Netflix has officially renewed F is for Family for season 2
Related Serial
When Will

BBC Two has officially renewed Two Doors Down for series 2

The release date for Two Doors Down series 2 — PendingThis article has the most up-to-date info on the status of Two Doors Down Series 2 as we continuously monitor the news to keep you in the know. BBC Two has officially renewed the series for…

Netflix officially renewed Love for season 2 to premiere in 2017

The release date for Love season 2 — PendingThis article has the most up-to-date info on the status of Love season 2 as we continuously monitor the news to keep you in the know. Netflix has officially renewed the series for another season expected…