This article has the most up-to-date info on the status of Suspects Series 6 as we continuously monitor the news to keep you in the know. Channel 5 is yet to make a decision on its future. Subscribe to our automatic updates below. 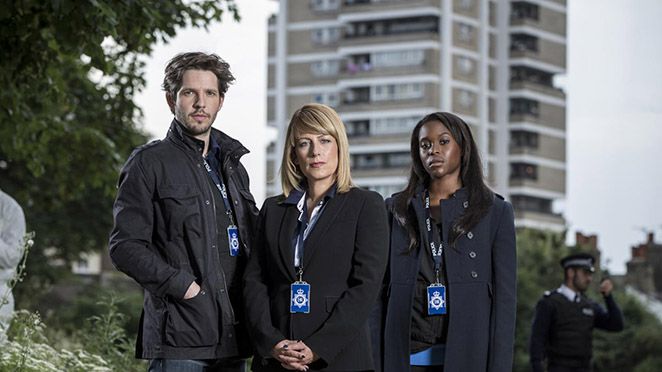 Suspects is an unscripted British police procedural TV series airing on Channel 5 since the original release date on February 12, 2014. It is currently in its fifth series, which premiered on August 3, 2016. The series is produced by Newman Street.

The series follows three London detectives DS Jack Weston (Damien Molony), DC Charlie Steele (Clare-Hope Ashley) and DI Martha Bellamy (Fay Ripley) as they investigate a wide variety of crimes. The crimes are solved in a documentary style, and the actors don`t actually have a script. The basic structure of the plot is described to them, and they take it into their own hands with improvisation of dialogue and emotional reactions. The main cast went through a several week long police workshop with a retired officer in order to prepare for the filming, and learned many important aspects of police work, such as interviewing techniques, terminology and other general and technical aspects that might not be widely known to the public.

There are some serious cast changes, with Fay Ripley retiring from the show due to another filming commitment. This means that her character, DI Martha Bellamy is making an exit, turning up shot to death, during the upcoming series` very first episode. A whole new trio of detectives appear in order to investigate her death – DCI Drummond (Cucumber`s James Murray), TDC Gary Roscoe (Perry Fitzpatrick from This is England) and DS Alisha Brooks (Lenora Crichlow). The fifth series introduced a bombshell running narrative right from the start, as the detectives plunge right into the investigation of their colleague`s death.

The series has received mixed reviews from both critics and viewers. Many seem to agree that the acting is not up to par, and that perhaps an actual script would have done the series some good. The documentary quality is successfully achieved by the shaky camera, but at the expense of dialogue quality. However, the nice breakaway from the formulaic police procedural drama is definitely appealing to many viewers, as it has proven to be one of Channel 5`s more successful original series with a relatively large audience.

Suspects series 5 debuted with 0.98 million viewers tuning in, but viewership quickly declined to 0.63 and 0.59 million viewers for the two subsequent episodes. No announcements regarding Suspects` further renewal have been made yet, so please sign up for our automatic updates and we`ll be sure to inform you when a decision is made either way.

Subscribe to receive news and updates when a show is renewed or canceled. You will receive an automatic email when theSuspects Series 6 Episode 1 release date is officially announced.

Share this with friends:
ReleaseDate.show » Release » Channel 5 is yet to renew Suspects for series 6
Related Serial
When Will

The release date for The Fall season 3 — PendingThis article has the most up-to-date info on the status of The Fall season 3 as we continuously monitor the news to keep you in the know. BBC Two has officially renewed the series for another season…