This article has the most up-to-date info on the status of UnREAL Season 3 as we continuously monitor the news to keep you in the know. Lifetime has officially renewed the series for another season expected to debut in 2017. To get notified of the exact premiere date – subscribe for updates below. 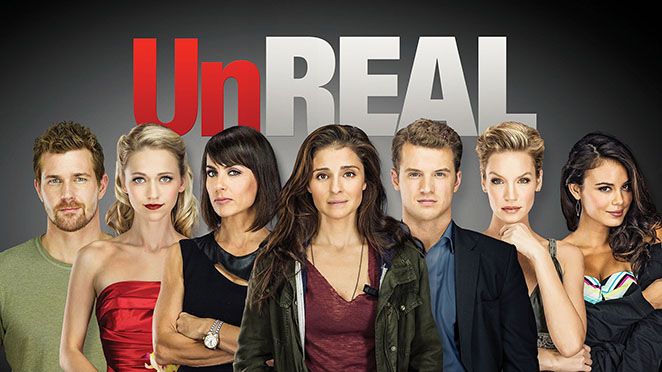 Rachel Goldberg is a producer of the popular dating show Everlasting and is responsible for anything and everything that has to do with the show. Her boss, executive producer Quinn King, is demanding and stringent, with a very clear vision of how much drama there needs to be on their series. It is Rachel’s duty to manipulate the relationships of the Everlasting contenders to create the outrageous drama that will match Quinn’s vision.

A scripted series about the making of a reality series? Yes, and not just a hilarious one, but one honored by the American Film Institute as Television Program of the Year and a three-times nominee for Critics` Choice Awards! With just as much drama on the set of Everlasting as there is off it, UnREAL embraces the insanity of a reality television series production set. Well-written, witty and hilarious, the series received ratings of 98% on Rotten Tomatoes and 7.4 out of 10 on IMDb. The second season ratings, however, are not as impressive as those of the premiere installment – three episodes are averaging slightly below 0.5 million viewers. In any case, we already know that in early June 2016 Lifetime has renewed UnREAL for a third season ahead of the second season premiere. The upcoming season will contain 10 episodes and is scheduled to air in 2017. Stay tuned for release dates.

Share this with friends:
ReleaseDate.show » Release » Lifetime officially renewed UnREAL for Season 3 to premiere in 2017
Related Serial
When Will