This article has the most up-to-date info on the status of Man Seeking Woman season 3 as we continuously monitor the news to keep you in the know. FXX has scheduled the premiere date for a new season for January 4, 2017. 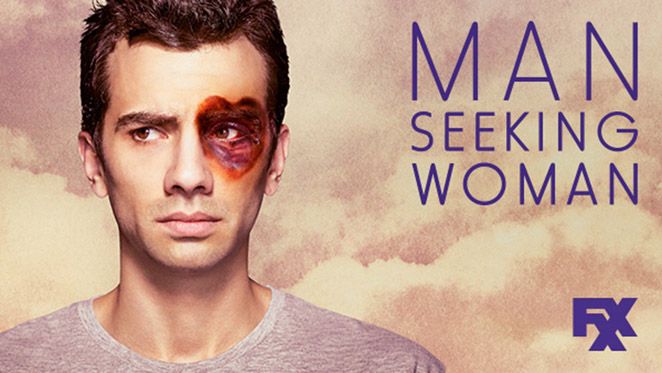 Man Seeking Woman is an American romantic surrealist situational comedy series airing on FXX. It has made a debut on January 14, 2015, and has returned with the second season on January 6, 2016. The unusual show is created by Simon Rich, produced by Broadway Video and FX Productions and executive produced by Simon Rich, Jonathan Krisel, Andrew Singer, Lorne Michaels and Ian Maxtone-Graham.

The series portrays one man`s absurd and hilarious search for love. After a break-up with a long-term girlfriend, Maggie (Maya Erskine), Josh Greenberg (Jay Baruchel) goes through absolutely surreal feats as he goes out with an actual troll, attends a wedding in hell, or decides to be surgically joined to his girlfriend Rachel. The things that happen to Josh are what might have been regular interactions that are taken by the authors absolutely absurdly and literally to the furthest extent imaginable.

Ratings, reviews and possibilities of renewal

What results is a very clever and amusing television program, starring a regular guy who finds himself in the midst of odd and awkward situations. This quirky, imaginative series holds a 7.5/10 rating on IMDb, with positive viewer reviews that warn of non-PC humor and edginess. The ratings are not very high, with 0.25 million viewers and a 0.14 rating for the January 20 episode, however, it is almost a twice-over increase compared to season one viewership. Hopefully the numbers will pick up some more, so that we can be sure that Man Seeking Woman is renewed for another run.

A 10-part second chapter of Josh’s quest to find love concluded on the FXX network on March 9, 2016. The finale episode delivered rather disappointing ratings of just 0.167 million viewers, which is even lower than the season average and way below the result of the first episode that drew in the audience of 0.28 million. As the finale leaves Josh again unlucky in love, it is nonetheless inspiring to see him more in tune with himself, a healthier perspective on dating in general and what really matters in life (like his friendship with Mike, for example). Although the creative team has plenty of ideas for Josh’s future, the fate of the sitcom is rumored to be in jeopardy. This could be the series’ finale we have watched on March 9th. Let’s wait for the official news from the network though.

UPDATED April 13, 2016: One of the most unusual and funniest takes on modern dating and relationships, FXX`s original series Man Seeking Woman has been renewed for a third season. The new season is set to contain 10 episodes and will air in early 2017. The series` second season viewership has edged up 2% compared to the numbers from the first season (399,000 vs. 393,000). The whole creative team and cast is staying on board for the next exciting season, so please stay tuned for the release date announcement.

UPDATED November 8, 2016: The third season of hilarious romantic comedy Man Seeking Woman is slated to premiere on January 4, 2016 at 10:30pm with strong lead-in from the season 12 premiere of It`s Always Sunny in Philadelphia. For the first time ever the upcoming season will feature Josh attempting to undertake a long-term relationship, and the issues that are going to come up in their romantic union with Lucy range from God and evil drug lords to student loans and common friends. Sign up for our automatic updates and receive a reminder of the release date one day before the premiere.

BET is yet to renew Zoe Ever After for season 2