This article has the most up-to-date info on the status of A League of Their Own season 12 as we continuously monitor the news to keep you in the know. Sky1 has officially renewed the series for another season. To get notified of the premiere date – subscribe for updates below. 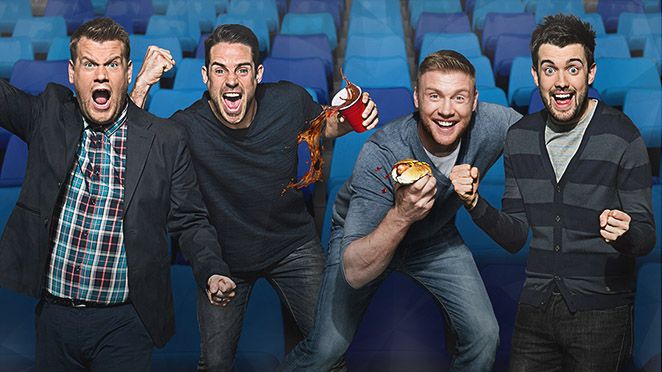 Created by Paul Brassey, A League of Their Own is a British comedy sports panel game that is set up as a panel quiz with two teams of three people competing against each other. The program originally aired in March of 2010 and has had a successful ten-season run. A League of Their Own series 11 premiered on September 22, 2016 on Sky1. The fast-paced BAFTA-winning comedy show is funnier and more energetic than ever, with the excellent host James Corden returning to entertain the audience.

In this show two teams – the Reds and the Blues – are captained by Andrew Flintoff and Jamie Redknapp, and compete in three rounds of a sports-based game. The show includes high profile guests and at times features physical challenges based on the sport of the guest.

The series has received critical acclaim and great viewer ratings. It is fun, energetic and challenging and keeps the audience on its feet the entire time. Considered Britain’s number one television sports game show, the series scores an 8 out of 10 on IMDb and has a very steady viewership base. Anthony Joshua, Rob Beckett and Roisin Conaty joined the regular crew led by James Corden in the premiere episode of the series 11, which drew an audience of 0.83 million viewers. The current installment will be comprised of eight episodes, an outtakes special and a highlights episode. It is not surprising that in August 2016 Sky1 announced that it commissioning three more series of the game show, which means that we will see the show through series 14. Furthermore, its spinoff A League of Their Own has also been renewed for a second chapter. In any case, A League of Their Own is coming back, and that`s great news for the fans.

UPDATED December 5, 2016: Sky1`s popular game show A League of Their Own will conclude the current broadcast of its 11th series with a light-hearted Christmas special on December 24, 2016 at 9pm. The Christmas Eve episode will portray Corden, Whitehall, Flintoff and Redknapp playing pranks on each other while wearing Santa Claus hats and watching the compilation of the best bits from the current installment. Tune in for a healthy dose of holiday fun and stay tuned for the release date of the 12th series of the comedy panel game program.

Share this with friends:
ReleaseDate.show » Release » Sky1 has officially renewed A League of Their Own for season 12
Related Serial
When Will