This article has the most up-to-date info on the status of American Dad! season 13 as we continuously monitor the news to keep you in the know. TBS has officially renewed the series for another season. To get notified of the premiere date – subscribe for updates below. 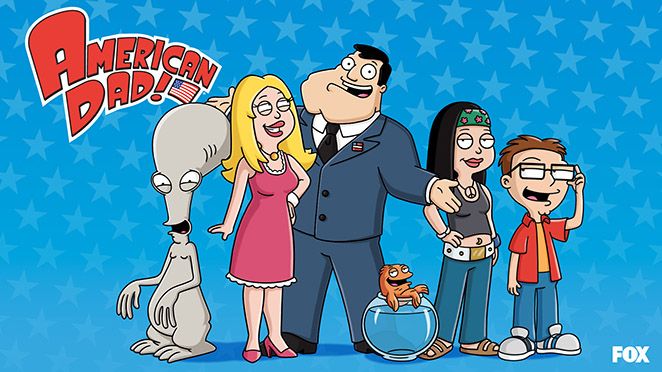 American Dad! is a US animated adult sitcom television series that has been on the air since 2005. The current 22-episode twelfth season premiered on TBS on November 7, 2016. The series is created by Seth MacFarlane, Mike Banker and Matt Weitzman, and produced by Fuzzy Dog Productions, Underdog Productions, Fox Television Animation and 20th Century Fox Television. It was originally created for Fox Network, but was moved to TBS in the fall of 2014. New episodes air on Adult Swim a week after their premiere on TBS.

The series genre lies somewhere in-between farce and observational comedy. Most of the issues and storylines are realistic, but a wedge of the fantastic is often driven into the everyday fabric. There is a recurring element of the absurd, but the stories are mostly grounded in family issues and personal relationships of the offbeat characters – the macho head of the family and CIA agent Stan Smith, his nagging and indignant wife Francine, their nerdy and ambitious son Steve and new-age hippie daughter Haley. Their wise goldfish is also the part of the family. The guest roster this season includes Jemaine Clement, Walton Goggins, Jennifer Coolidge, Rosey O`Donnell, Wiz Khalifa, Susan Sarandon and several others.

American Dad! has been nominated for a number of awards, including two Emmys and two Annie Awards. There have been multiple discrepancies in the season count, but we will follow the network`s count as per TBS` website.

In the 2005-2014 show`s broadcast on Fox the ratings gradually slid from 8.49 million viewers per episode for the first season to 2.77 million viewers. After the move to TBS the viewership dropped sharply to just over 1 million viewers, and seasons 11 and 12 remained at just that level. Between the show`s broadcast on TBS and Adult Swim and TBS` digital and on-demand platforms the average viewership reaches nearly 4 million viewers. While the ratings were not quite cutting it for Fox anymore, they are perfectly fine for TBS and Adult Swim. Thus even prior to season 11 premiere, on August 27, 2015, TBS has renewed the series through season 13, with twenty-two episodes each to each season, so fans need not worry about the fate of the next season – they`ll be getting their animated family sitcom fix for at least another year.

Share this with friends:
ReleaseDate.show » Release » TBS has officially renewed American Dad! for season 13
Related Serial
When Will