This article has the most up-to-date info on the status of Baby Daddy season 6 as we continuously monitor the news to keep you in the know. Freeform has officially renewed the series for another season. To get notified of the premiere date – subscribe for updates below. 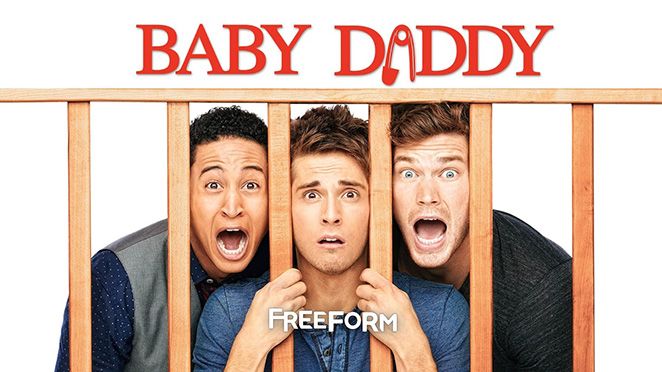 The series chronicles the life of Ben (Jean-Luc Bilodeau), a twenty-something bachelor bartender who is raising his little daughter with the assistance from his brother Danny (Derek Theler), their mother Bonnie (Melissa Peterman) and his best friends Riley (Chelsea Kane) and Tucker (Tahl Mowry).

The series has garnered much viewer praise for its heart-warming family-oriented humor and storyline, good acting and simple premise. Baby Daddy is a light-hearted comedy that doesn`t take on any deep issues, but provides an opportunity for an easy laugh and relaxation. The premiere episode of the series averaged 620,000 viewers in L+SD, and 1.095 million in L+7, showing a 77% increase in delayed viewership. The ratings have been more or less steady in the course of the series` run, and they seem to be high enough for the show to remain on Freeform`s renewal slate. Whether or not the series will actually be renewed for the sixth season is still unclear, so we will monitor the network announcements and keep you informed.

On August 3, 2016 the fifth season of popular Freeform sitcom Baby Daddy has wrapped up its 20-episode broadcast. The season finale went out with an audience of 0.59 million viewers and a 0.29 demo rating, a decent, but not a fantastic number. A wide range of new possibilities is opening up to all of the characters – a serious bombshell is dropped when Riley informs Danny that she is pregnant, Ben almost finds the perfect girl in Elle, Bonnie and Brad are reunited after his trip to Peru, and Tucker finds a reporting job that would take him to LA. After an accident that involves Emma and a pony the crew decides to stay in NY, continuing to help Ben with Emma’s upbringing. The series has already been renewed for a sixth season in view of its popularity, which will bring the episode count for the show to over 100. There has been no indication of a release date yet, so please stay tuned and we will keep you informed.

UPDATED April 8, 2016: The back half of the comedy series Baby Daddy`s fifth season has finally got a premiere date set. The show will air on Wednesday, June 1, 2016 at 8:30pm, right after the kickoff of season 5 part B of Young & Hungry. How is single fatherhood treating Ben? Tune in and find out! Sign up for our automatic notifications and receive an e-mail reminder one day prior to the release date.

UPDATED June 30, 2016: Freeform has renewed its hit family sitcom Baby Daddy for a sixth season, which will take the show into its anniversary 100th episode. The fifth season has performed very well, delivering ratings close to one-year highs among viewers 18-34. Ben will continue on his quest to find the perfect woman for himself, one who would also be able to become the new mom for his daughter Emma. Meanwhile his friends Tucker and Riley, and brother Danny help him and try to figure out what to do with their own lives. Sign up for our automatic updates and receive release date information for Baby Daddy season 6 as soon as it becomes available.

Share this with friends:
ReleaseDate.show » Release » Freeform has officially renewed Baby Daddy for season 6
Related Serial
When Will