The release date for Young and Hungry season 5 — Pending

This article has the most up-to-date info on the status of Young and Hungry season 5 as we continuously monitor the news to keep you in the know. Freeform has officially renewed the series for another season expected to debut in 2017. To get notified of the exact premiere date – subscribe for updates below. 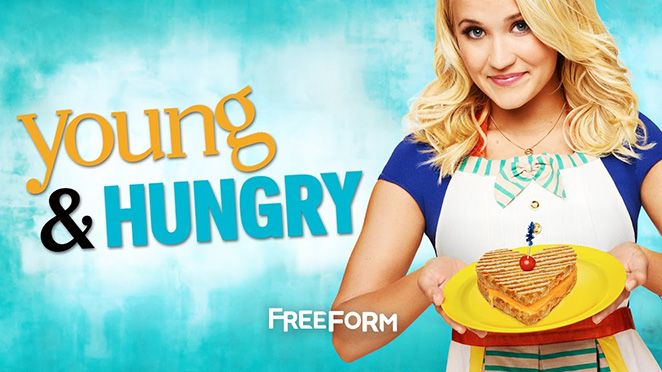 Young and Hungry is an American sitcom television series broadcast on Freeform (ex-ABC Family). It is created by David Holden and produced by CBS Television Studios, The Tannenbaum Company, Blondie Girl Productions and ABC Family Original Productions. The series originally aired in 2014, and the current fourth season has premiered on June 1, 2016 and is expected to contain 10 episodes.

The original plot setup is as follows: Gabi Diamond (Emily Osment) is a young San Francisco chef who applies for a job as a personal chef to Josh Kaminsky (Jonathan Sadowski), a young self-made millionaire in the tech industry who later becomes Gabi`s romantic interest. Sofia Rodriguez (Aimee Carrero) is Gabi`s best friend and roommate. What ensues involves romance, friendships, cooking and more.

The series` ratings on review aggregator websites are contradictory, with a very solid 7.6/10 on IMDb but a measly 43% on Rotten Tomatoes. The fourth season premiered to 530,000 viewers, actually gaining 130,000 by the third episode. The demo rating also grew from the initial 0.25 to 0.31. Curiously enough, the word “cute” appears in practically every review on IMDb, both positive and negative. Besides cuteness, the reviewers note good acting and writing and the low-budget style, which does not, however, seem to spoil the impression. The fourth season ratings look promising at this point, so let`s wait and see how the show fares over the course of the season and hope for further renewal. Stay tuned for relevant announcements.

The 10-episode fourth season of Young and Hungry has concluded on August 3, 2016 with an episode titled “Young and Screwed”. The season finale was watched by 0.53 million viewers, which is close to the overall season average viewership, as well as to the ratings of the previous completed chapter. There is more confusion, awkwardness and tenderness than ever between Gabi and Josh as they sleep together, then have second thoughts, then sexual tension builds up again. There’s heartbreak in the cards for Elliot when Keisha goes away to her long lost relatives, and Alan is there for his friend. Freeform has yet to make a renewal announcement for Young and Hungry season 5, meanwhile, there is a spinoff series titled Young and Sophia, which will star Ashley Tishdale. There’s no release date set for the spinoff yet, so please stay tuned for announcements regarding the fate of both shows.

UPDATED October 26, 2016: Great news for the fans of the popular romantic comedy with a cooking theme – on October 24, 2016 the sitcom’s star Emily Osment was the first to announce the renewal of Young and Hungry for a fifth installment in her Tweeter account. She also revealed that the next chapter will go into production in late October. The show is slated for a 2017 premiere, and you can sign up for our automatic updates and receive exact release date information as soon as it is confirmed.

Share this with friends:
ReleaseDate.show » Release » Freeform officially renewed Young and Hungry for season 5 to premiere in 2017
Related Serial
When Will