This article has the most up-to-date info on the status of Letterkenny season 2 as we continuously monitor the news to keep you in the know. CraveTV has scheduled the premiere date for a new season for December 25, 2016. 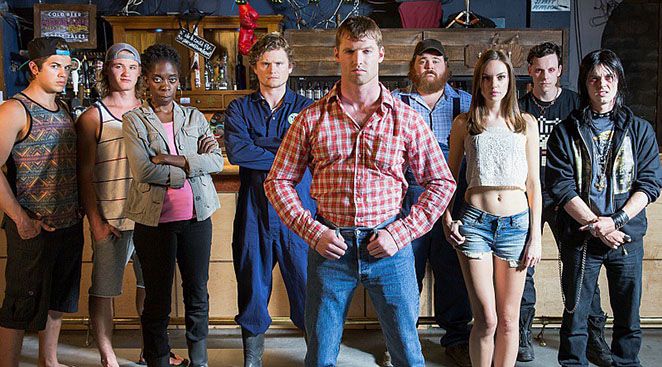 Letterkenny is a Canadian sitcom television series based on the hit short-format online series Letterkenny Problems, which is created by Jared Keeso, produced by New Metric Media and exec produced by Keeso and Jacob Tierney. The web series screened on Youtube since 2013, with a whooping total of over 10 million views, and garnered a nomination at the 2nd Canadian Screen Awards.

Keeso and Nathan Dales star as two friends living in a small fictional Ontario town based loosely on Keeso`s hometown in Canada. Wayne`s younger sister Katy (Michelle Mylett) is also a part of the picture. There are rivaling groups in town – Hicks, Skids, Hockey players and Christians in town, and most of the show`s based on everybody yapping away and occasionally getting into fights for random reasons.

All six half-hour episodes of Letterkenny premiered simultaneously on February 7, 2016 on Crave TV, when they were made available for streaming. The sincere, hilarious, authentic, straightforward delivery makes Letterkenny a hit, with an 8.3 IMDb rating and excellent reviews of the thoroughly entertained viewers. In preparation for its premiere the Letterkenny Problems shorts were also acquired and streamed on CraveTV since Friday, November 20, 2015, and CraveTV`s first ever original series turned out great for the network, with a warm reception and lot of room to grow.

Updated March 11, 2016: The Canadian series that turned, not completely unexpectedly, into a smash hit in its first season, Letterkenny, is renewed for a second season in flying colors. The huge cross-platform promo campaign did a lot for the series` success, but so did the fact that it originated from an Internet sensation hit and already had a vast following. The second season of the home-grown Canadian comedy will begin filming this spring, but no release date has been set yet, so please stay tuned for further updates.

UPDATED May 27, 2016: Just wanted to let the fans know that LetterKenny, the offbeat Canadian sitcom that became a breakout hit for CraveTV in its first season and has already been renewed for the second installment, is already in production. No release date has been set yet, but we are getting closer and closer to another season of random goofy fun. There are promising cast additions in the upcoming season – Melanie Scrofano as the tough Mrs. McMurray, and Alex Svencer and Stephen Huszar as Senior Hockey Players Barts and Yorkie. Season 1 is available for streaming on CraveTV, so you can familiarize yourself with the crazy world created by LetterKenny if you haven`t yet.

UPDATED November 29, 2016: Wonderful news for the fans of Letterkenny and all things goofy - the second season of CraveTV`s hit original sitcom Letterkenny is hitting the screens right on Christmas Day this year to support the holiday spirit in its very own special way. Tune in on Sunday, December 25, 2016 and don`t miss the exciting season premiere with our automatic updates.

CBC is yet to renew Mr. D for season 6

The release date for Mr. D season 6 — PendingThis article has the most up-to-date info on the status of Mr. D season 6 as we continuously monitor the news to keep you in the know. CBC is yet to make a decision on its future. Subscribe to our…

CBC is yet to renew Mr. D for season 7

The release date for Mr. D season 7 — PendingThis article has the most up-to-date info on the status of Mr. D season 7 as we continuously monitor the news to keep you in the know. CBC is yet to make a decision on its future. Subscribe to our…