This article has the most up-to-date info on the status of Bosch season 3 as we continuously monitor the news to keep you in the know. Amazon has officially renewed the series for another season expected to debut in 2017. To get notified of the exact premiere date – subscribe for updates below. 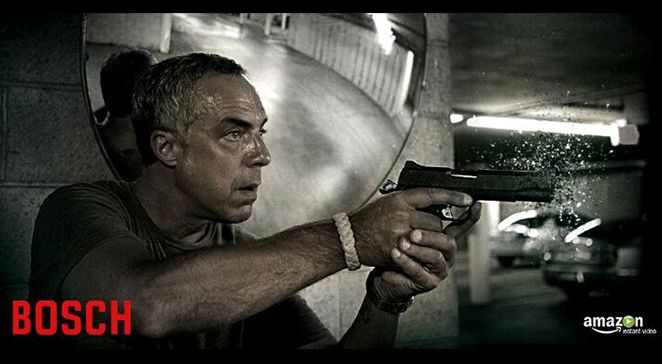 Bosch is an Emmy Award-nominated American detective drama web series. Produced by Amazon Studios and Fabrik Entertainment, the critically acclaimed series is available to the subscribers of Amazon Prime. The show was developed by Michael Connelly based on his novel book series of the same name. He also adapted it for the small screen together with Eric Overmyer, and they both serve as executive producers Jan David Frouman and Henrik Bastin. The debut season of Bosch came out on Amazon Prime on February 13, 2015.

Books by Michael Connelly are considered ideal for film adaptation and Bosch is no exception. The plot of the detective drama focuses on investigator Harry Bosch who typically undertakes the most complicated of cases. It is no coincidence that the protagonist became a detective: when he was a child, his mother was murdered. Although she earned her living by working as a prostitute, the boy still had fond and tender memories of his mother. When he was just 11 years old, Harry already realized that life was not as simple as he would have dreamed of. Every criminal case that Bosch takes on is a complex story with many intertwined nuances and details. The main character enjoys solving the most difficult cases that others tend to give up on. He takes the utmost care is considering all possible scenarios, finding witnesses where there seemed to be none.

Season 2 of Bosch was made available to Amazon Prime members on Friday, March 11, 2016 in its entirety – ten one-hour episodes. In the first installment of the critically-praised police procedural, the talented detective tackled the murder case of a 13-year old boy. When the series returned in March, Harry is chasing after a notorious serial killer while trying to solve the murder of a well-known producer from Hollywood. The debut season of the show garnered lots of glowing reviews from viewers and critics alike, singing praised to the lead actor Titus Welliver, the cinematography and the overall feel of the gritty police drama. The second installment of the gritty police drama returned with a vengeance and surely did Connelly proud. While the debut season managed to establish Harry as the central character and a very accurate representation of what many readers have visualized while reading the novels, the second chapter of the series did a brilliant job at bringing as many pages from the book series alive as possible. Having watched both seasons of this gripping, captivating and intense detective drama, we believe it is one of the best examples of the police noir genre. Hopefully, Amazon will be satisfied with the viewership numbers, because millions of fans would love to hear the renewal news as soon as possible.

UPDATED April 1, 2016: No, this is not an April Fools’ Day joke. This is the good news many fans of the Amazon original crime drama series Bosch have been anxiously waiting for ever since the second chapter of the gritty drama was made available on March 11, 2016. Amazon has officially renewed the popular cop drama starring Titus Welliver for a third season. While the online giant claimed that the debut installment of the series became their most-watched original series, judging by the stellar reviews of the most recent season, the detective drama might as well beat its own record. Both seasons are now available online for the residents of North America, the UK, Germany and Austria. No word yet about a new storyline, cast changes or a potential release date, so stay tuned and subscribe to our updates to get informed.

UPDATED August 22, 2016: Amazon’s Emmy-nominated criminal drama Bosch will launch its third season in 2017. There is the newest addition to the cast — Jeffrey Pierce (of The Tomorrow People) has joined the series talent roster as Trevor Dobbs, ex-Special Forces lieutenant just out of the military. The upcoming chapter will be drawing on the material from Michael Connelly`s The Black Echo (1992) and A Darkness More Than Night (2001). Sign up for our automatic updates, and receive release date information for Bosch season 3 in your inbox as soon as it is revealed.

Share this with friends:
ReleaseDate.show » Release » Amazon officially renewed Bosch for season 3 to premiere in 2017
Related Serial
When Will