The release date for Those Who Can`t season 3 — Pending

This article has the most up-to-date info on the status of Those Who Can`t season 3 as we continuously monitor the news to keep you in the know. truTV is yet to make a decision on its future. Subscribe to our automatic updates below. 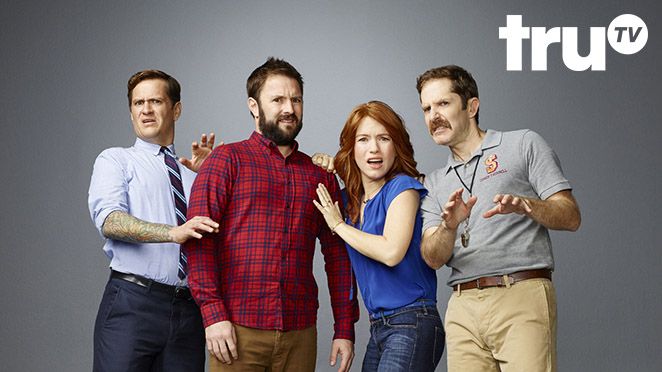 Those Who Can`t is a comedy television series airing on truTV since February 11, 2016, and season 2 kicked off on October 6, 2016. The series is produced by 3 Arts Entertainment, Thank You and Brain! Productions, and executive produced by Angel Annussek, Tracey Baird, Adam Cayton-Holland, Rich Korson, Josh Liberman and Dean Lorey. The first season of Those Who Can`t contained 10 episodes, and the sophomore installment received an extended order of 13 episodes.

The three teachers at the center of the plot are Loren Payton (Adam Cayton-Holland), Andy Fairbell (Andrew Orvedahl) and Billy Shoemaker (Ben Roy) are pretty far from being perfect. In fact, they might be more trouble than the kids they are supposed to teach. The series premiere episode saw the trio pitted against a school bully, and they take the battle seriously, to say the least. Their revenge plot fails, and the teachers are faced with the need to deal with the consequences. In the second season there’s more behind-the-scenes scheming as the inept teacher trio and their colleagues attempt to hold on to their jobs and deal with their students. Cheri Oteri, Patton Oswalt and Baron Vaugn appear as guest stars in the current installment.

It is the first full-length scripted series for truTV network, and is a breakthrough for the original programming department. The second season debuted with 339,000 viewers, down from 444,000 for the freshman chapter premiere ratings. The subsequent two episodes attracted an average of 240,000 viewers, which is not entirely disappointing, but does not guarantee the comedy series a renewal. The series` comedic delivery is the best part of it, according to many reviewers, and it is not surprising given the actors` comic background – the three stars are members of Denver-based comic group The Grawlix. The concept, however, is somewhat derivative, but even considering that, we hope that Those Who Can`t will get a chance to develop into the third season, and find an even fresher and more relevant way to reach the viewer. Stay tuned, and we will inform you of significant announcements made by the network.

Subscribe to receive news and updates when a show is renewed or canceled. You will receive an automatic email when theThose Who Can`t season 3 Episode 1 release date is officially announced.

Share this with friends:
ReleaseDate.show » Release » truTV is yet to renew Those Who Can`t for season 3
Related Serial
When Will