The release date for The Expanse season 2 — Pending

This article has the most up-to-date info on the status of The Expanse season 2 as we continuously monitor the news to keep you in the know. Syfy has officially renewed the series for another season expected to debut in January 2017. To get notified of the exact premiere date – subscribe for updates below. 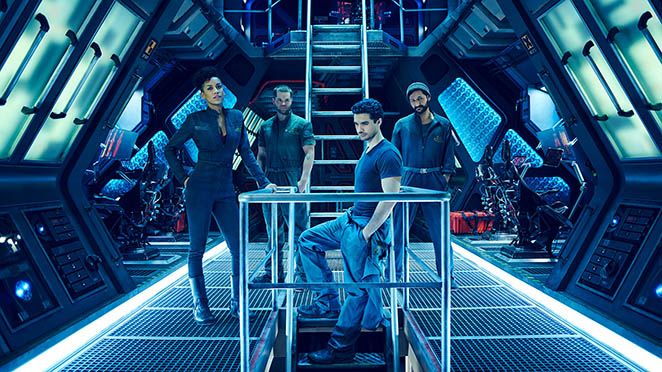 The Expanse is a new sci-fi and mystery television series, a space opera based on the bestselling book series by James S.A.Corey. Produced by Penguin in a Parka, SeanDanielCo and Alcon Entertainment, the series came out on SyFy on November 23, 2015.

The story is set in the future, 200 years from our days, with the Solar system colonized by humans. The multi-storyline plot takes us to three different places with three absorbing stories unfolding in front of our eyes. There`s a search for a missing young woman led by detective Miller (Thomas Jane), a terrible incident on an ice freighter, which might destabilize Earth, Mars and the Belt, and the freighter`s first officer James Holden (Steven Strait) has to manage the consequences. Simultaneously, UN executive Chrisjen Avasarala (Shohreh Aghdashloo) is working desperately to prevent the war between Mars and Earth. Soon enough we find out that all these events are parts of a dangerous large-scale conspiracy that threatens the very existence of humanity.

Audience reception and chances of renewal

Fans of the science fiction genre are predominantly very happy to see a series of this quality and scale come out, calling it old-school sci-fi. SyFy`s ambitious project`s storyline is brilliant, and while we can mostly credit the book author for that, we can also certainly praise the series` creators for sticking to the story. The attention to detail, multifaceted characters, beautiful camera work, and many other positive qualities of the series are universally praised. It would seem that the series has great potential, and its renewal is almost imminent. However, The Expanse`s ratings haven`t been that impressive at all, with a 1,02 million viewers for the series premiere. Meanwhile, the series has already been renewed, with the writing for the second season having started prior to the freshman season premiere. Perhaps the numbers will pick up later on in the season, but you have to stay tuned to the network news to see how this contradictory situation might get resolved.

UPDATED January 6, 2016: SyFy`s Expanse freshman season will have a continuation in early 2017, the network announced. The premiere episode of the Expanse didn`t have amazing ratings, with a 1.2 million viewers and a 0.3 rating in the 18-49 demographic. The season finale showed a result of approximately half that number, but the weekly average was boosted to an audience of 1.6 million viewers by the Live+3 DVR numbers. Where will Expanse take its characters in the next series? Subscribe to our notifications and find out when the release date is scheduled for the second season of the Expanse.

UPDATED July 24, 2016: The teaser for the second season of The Expanse was revealed during the show`s panel at the San Diego Comic-Con, which is eventful, as always. The upcoming season of the comic adaptation is set to contain 10 episodes and will pick up after the real aftermath of the Eros events is discovered. It will continue to chronicle the race through the solar system in search of answers and with the goal of averting the imminent threat to humanity. The Expanse will broadcast its second season in January 2017. Sign up for our automatic updates, and we`ll be sure to inform you as soon as the exact release date is announced.

Share this with friends:
ReleaseDate.show » Release » Syfy officially renewed The Expanse for season 2 to premiere in January 2017
Related Serial
When Will