This article has the most up-to-date info on the status of Sing It On Season 2 as we continuously monitor the news to keep you in the know. Pop has scheduled the premiere date for a new season for July 27, 2016. 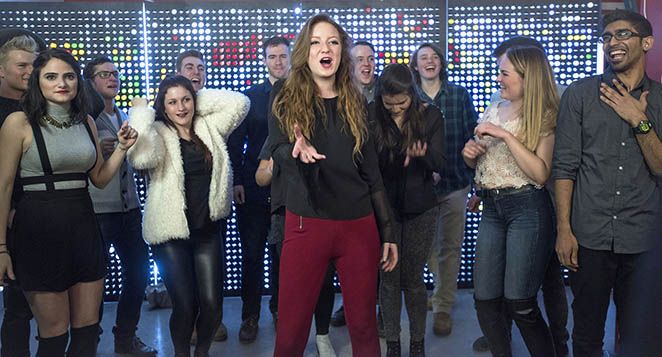 Inspired by the hit movie Pitch Perfect, Sing It On is an American reality television series that focuses on five collegiate a cappella teams competing to win the International Championship of Collegiate A Cappella Finals. Produced by John Legend, Sing It On Season 1 premiered on Pop on May 13, 2015.

In this story of friendship, music and intense competition, the producers present teams from three colleges who are looking for new singers and go through auditions, callbacks and competition of a prestigious a cappella championship. The set up somewhat reminds that of American Idol, where singers present what they are capable of. Unlike American Idol, those who compete have to not only be able to sing, but also fit in with the group that they are being chosen for, as they will be spending a lot of time together in the future.

The series portrays an arduous competition process and is filled with drama, laughter and tears. Unlike many other talent shows, Sing It On has the feeling of unity and compatriotism amongst the groups, as they choose who will replace the seniors that are leaving and prepare for the competition. Premiering to good reviews, the series received a score of 6.9 out of 10 on IMDb. Although there is no official news on the fate of the series, its popularity warrants a continuation and we hope to see Sing It On Season 2 some time in the future.

UPDATE January 13, 2016: Sing It On, the collegiate a cappella competition series noted for its friendly atmosphere is coming back for a second season. The original documentary series will feature five new teams competing at the International Championship of Collegiate A Cappella. The second season of Sing It On will contain eight 60-minute episodes. Production is set to begin in January, and the second season is scheduled for release in the second half of 2016.

UPDATED June 30, 2016: The a cappella competition program that has charmed the audience in its first season is returning very shortly with an eight-episode second installment to present new groups and chronicle their quest to to advance to the ICCA finals. Tune in to Pop on Wednesday, July 27, 2016 at 9pm ET/PT and enjoy the show! The following four teams will be featured in the upcoming chapter: Faux Paz (University of Maryland), Off The Beat (Upenn), Hexacords (UMass Amherst) and S#arp Attitude (UMass Amherst). Sign up for our automatic updates, be reminded of the release date one day in advance and don`t miss the exciting season premiere.

Share this with friends:
ReleaseDate.show » Release » Pop scheduled Sing It On Season 2 premiere date
Related Serial
When Will