This article has the most up-to-date info on the status of Good Bones season 2 as we continuously monitor the news to keep you in the know. HGTV has officially renewed the series for another season expected to debut in January 2017. To get notified of the exact premiere date – subscribe for updates below. 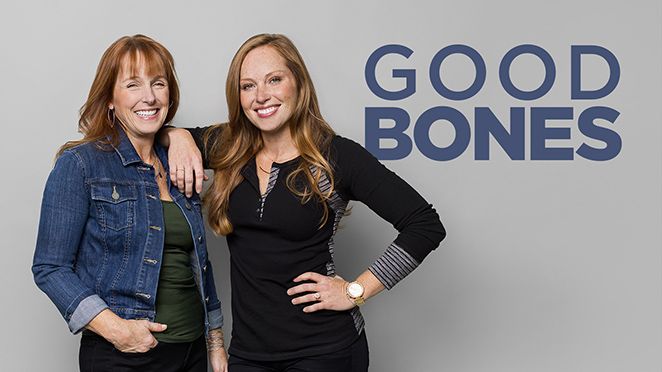 HGTV`s newest home-flipping series, Good Bones, has premiered on March 22, 2016. The series, produced by High Noon, features Indianapolis ex-defense attorney Karen E. Laine and her daughter Mina Starsiak who turned into home flippers. The mother-daughter duo purchases condemned properties, or homes set to be demolished, and renovate them with all-new floor plans and spatial design. They avoid spending over $100,000 on their purchases, and spend approximately the same amount on revamping the house.

The ladies own the Two Chicks renovation company, and were approached by HGTV to produce a pilot, which was released to very favorable reviews. The 10-episode season was subsequently commissioned, and the two women had to speed up and renovate 10 homes in the six months of the production time, wherein before they became stars of their own reality series they worked on only about three homes per year.

Home renovation and flipping series are the most successful programs on HGTV network. It`s no wonder then that the channel continues to look for new formats and new characters to feature in this ever-popular format. Good Bones premiered to 1.311 million viewers and a 0.3 rating in the 18-49 demographic, experiencing an unusual and significant surge of viewership by the second episode, which attracted 2.118 million viewers and scored twice the demo rating, bringing it to 0.6. With numbers like these, Good Bones is definitely a keeper, and will certainly remain on HGTV for a while.

UPDATED May 3, 2016: The inspiring Indiana-native mother-daughter duet is bound our way again! The popular HGTV home rehab series Good Bones has been picked up for a second season, which is slated to contain 12 episodes and should be released in January 2017. The series features home renovations that improve the entire community, and is well-loved for that. Sign up for our automatic updates and receive a notification as soon as a release date is set for the second season of Good Bones.

Share this with friends:
ReleaseDate.show » Release » HGTV officially renewed Good Bones for season 2 to premiere in January 2017
Related Serial
When Will