This article has the most up-to-date info on the status of Archer season 8 as we continuously monitor the news to keep you in the know. FX has officially renewed the series for another season expected to debut in January 2017. To get notified of the exact premiere date – subscribe for updates below. 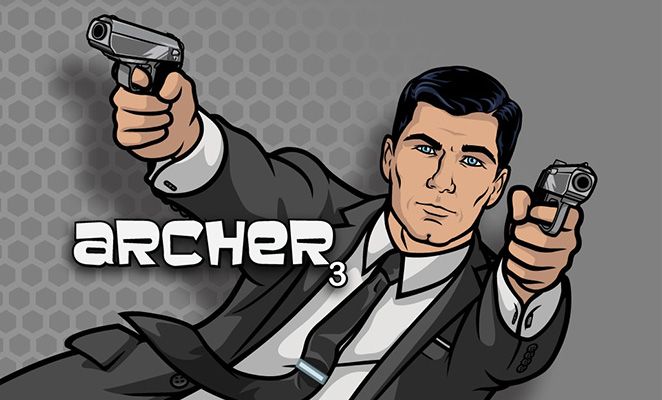 Archer is a widely acclaimed adult animated action and comedy series running on FX since 2009. Its seventh season premiered on March 31, 2016. The series is created by Adam Reed, executive produced by Reed and Matt Thompson, with Casey Willis co-executive producing. Floyd Country Productions, Radical Axis and FXP are behind the series.

Sterling Archer is a suave, ego maniac, not-too-bright spy working for ISIS, an organization headed by his distant and dominating mother Malory Archer. ISIS stands for International Secret Intelligence Service, and not what you might have thought, although by the sixth season the name ISIS was dropped from the show, with all of the characters starting to work for the CIA (having briefly attempted forming a drug cartel of their own with the heaps of cocaine acquired in previous operations). In the current seventh season there is another career U-turn for the main characters, as the group is fired from the CIA and launches a private detective agency in LA. The series` historical backgrounds change somewhat haphazardly, which deliberately makes the show ambiguous in that regard.

The show has been very positively reviewed and has received many nominations and awards – including a Primetime Emmy for Outstanding Creative Achievement in Interactive Media – Multiplatform Storytelling and several Critics` Choice Television Awards for Outstanding Animated Program. With an 8.8/10 IMDb score and viewership ratings that have remained strong and steady throughout the series` run, fans don`t need to worry about Archer being canceled for a while. The current season premiered to over a million viewers, which is a very reasonable number, slightly higher than the previous season average. Stay tuned for announcements from the network.

The 10-episode seventh season of adult animated comedy and action series Archer has bowed out on FX on June 2, 2016. The season was originally slated to comprise 13 episodes, but later the order was reduced. The series finale ended with Sterling Archer floating (presumably) dead in the pool, while his robotic double, whom Sterling unleashed to trick Veronica into admitting that she murdered Ellis Crane, was alive and well, despite a bullet in his stomach. Matt Thompson, one of Archer`s executive producers, has recently revealed in an interview to The Daily Beast that Archer might indeed be dead for good. There has been no renewal announcement yet, and it`s difficult to assess the renewal potential, since the series has already had a long and fulfilling run, and the ratings have slid significantly from 1.067 million viewers for the season premiere to 708,000 for the finale, while the demo rating decreased from 0.54 to 0.38. Stay tuned and we`ll inform you of all relevant developments in Archer`s fate.

UPDATED June 22, 2016: In an unpredictable act of generosity FX has just announced the renewal of fan-favorite animated spy spoof Archer for not just one, but three seasons. Each of the three upcoming seasons (8, 9 and 10) will be comprised of eight episodes, and the eighth season is already tentatively slated to air in early 2017, with the producers assuring that it will continue to surprise the audience. The fans can exhale and relax, since the last completed seventh season saw a decline in ratings (nothing tragic, but significant nonetheless), and the fate of the series was not quite clear. Sign up for our automatic updates and we`ll inform you of any news relevant to the upcoming seasons of Archer.

UPDATED October 1, 2016: Your favorite spy spoof Archer is likely to be ending after season 10, as the series creator Adam Reed has mentioned during a recent podcast. According to his plans, the remaining installments are slated to be shorter, with just eight episodes each, and are likely to be as different from each other, as from the preceding chapters. Season 8 will air in January 2017, so please stay tuned, and we will bring you the latest information on the release date of Archer season 8.

Share this with friends:
ReleaseDate.show » Release » FX officially renewed Archer for season 8 to premiere in January 2017
Related Serial
When Will