This article has the most up-to-date info on the status of Neon Joe Werewolf Hunter season 2 as we continuously monitor the news to keep you in the know. Adult Swim has officially renewed the series for another season expected to debut in fall 2016. To get notified of the exact premiere date – subscribe for updates below. 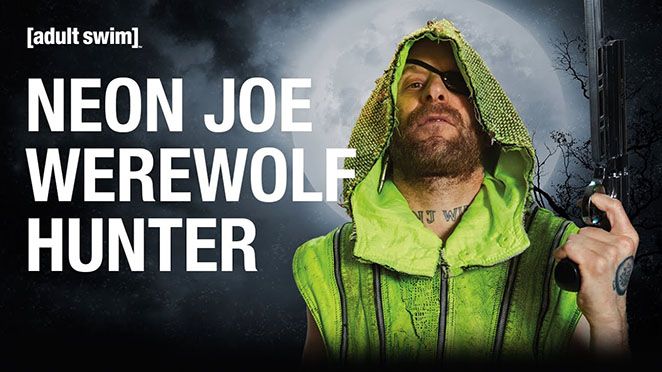 Neon Joe, Werewolf Hunter is a horror parody, action and comedy 5-episode television miniseries that aired nightly on Adult Swim from December 7, 2015 to December 11, 2015. The series is created, produced and stars Jon Glaser, and is produced by PFFR. Jon Glaser is known for his performances in Parks and Recreation and Girls, as well as for his recent Adult Swim project Delocated.

Neon Joe is set in a Vermont town that`s quaint to the point of almost being ridiculous, and right against this lovely background is where werewolves start murdering people and the comical alpha male hero Neon Joe fights them in his neon highlighter outfit. The freelance werewolf hunter lands in the Twin Peaks-ish town of Garrity to discover that there are secrets to be discovered and a bunch of eccentric characters to deal with, besides his principal task. Scott Adsit stars as Sonny Cocoa, Steve Cirbus is Sheriff Dalton, Steve Little is Cleve Menu and Stephanie March plays Mayor Carol Blanton.

Neon Joe fared very well for such a niche show – over 1.1 million viewers and a 0.6 rating in 18-49 demographic. The show is off-beat and energetic, its deadpan humor and loopiness are inventive and refreshing. It seems that Adult Swim has a winner on its hands, and we should expect a continuation of the silly – in the best sense of the word - and inventive series. Will Neon Joe, Werewolf Hunter be picked up for another run? No word from the network just yet.

UPDATED May 14, 2016: Tailored to the tastes and interests of the millennials, the Time Warner-owned cable network Adult Swim continues to be the leader in this demographic group. Year after year, the network manages to grow its audience which in turn motivates it to expand the original programing lineup. Ahead of its annual Upfront Presentation scheduled to be held in NYC next week, the network unveiled its new 2016 programming slate, having renewed a number of its ongoing series and adding quite a few new shows. The freshman horror and sci-fi comedy series Neon Joe Werewolf Hunter, which was originally planned as a mini-series, has been officially picked up for a second round. Subscribe to our updates and we will drop you an automated email when the release date of Neon Joe Werewolf Hunter is revealed.