This article has the most up-to-date info on the status of Outcast season 2 as we continuously monitor the news to keep you in the know. Cinemax has officially renewed the series for another season. To get notified of the premiere date – subscribe for updates below. 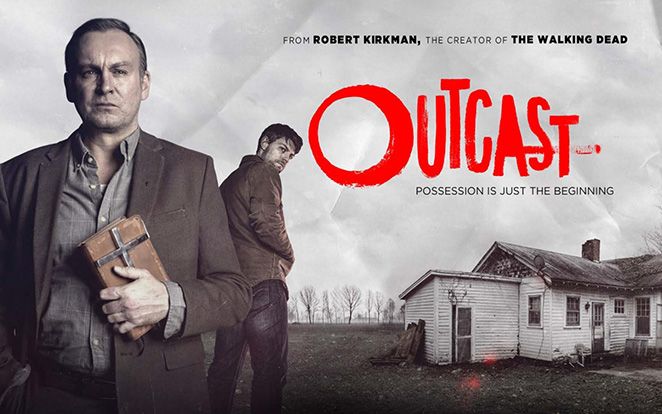 Outcast is a horror drama series broadcast on Cinemax in the US. It is based on eponymous Robert Kirkman`s (The Walking Dead) comics, executive produced by Kirkman, Chris Black, David Alpert, Sharon Tal Yguado and Sue Naegle and produced by Circle of Confusion, Skybound Entertainment and Fox International Studios. The series premiered on June 3, 2016 with a 10-episode first season.

The series is centered on the subject of demonic possession. The main character duo – Kyle Barnes (Patrick Fugit) and Reverend Anderson (Philip Gleinster) are searching for the answers to the question of the reasons for Kyle being surrounded by possessed people throughout his life, and attempt to save those suffering from demons. He has had a tumultuous life, beginning with his troubling childhood, and now wants to face his past and transform his present. The rest of the main cast includes Wrenn Schmidt, David Denman, Julia Crockett, Kate Lyn Sheil and Reg E. Cathey.

In mid-March, prior to the second season, the series was renewed for a second season. The viewership average for the first three episodes is approximately 0.17 million viewers, and the critical reception has been mostly positive so far. Outcast scored 79% on Rotten Tomatoes, 8.2/10 on IMDb and 70/100 on Metacritic, with reviewers welcoming the show as one full of genuine thrills and of a higher quality than most of the shows reserved for summer release. The series seems to have the viewers hooked, and the network must have sensed the success coming when it made the early second season renewal decision. Stay tuned, and we will inform you as soon as the release date is announced for Outcast season 2.

Outcast, Cinemax`s successful horror drama has wrapped up the broadcast of its first season on August 12, 2016. By the season finale the role of Kyle`s daughter Amber has become increasingly significant, and she is now an integral part of the team that fights demonic forces along with Kyle and Reverend Anderson. The next season, which is already confirmed, will feature the continuation of the struggle that is bound to be dangerous and almost impossible to win. The final shot of the season makes it obvious that there is no quiet refuge for the trio, and that evil will follow them everywhere if they attempt to escape. The final tenth episode of the season drew a relatively small audience, with numbers close to season lows, drawing an audience of 0.152 million viewers and therefore denoting a certain loss of viewer interest. Stay tuned for the release date of the upcoming second season, and get ready for more thrills.

Share this with friends:
ReleaseDate.show » Release » Cinemax has officially renewed Outcast for season 2
Related Serial
When Will