This article has the most up-to-date info on the status of Famously Single season 2 as we continuously monitor the news to keep you in the know. E! has officially renewed the series for another season expected to debut in 2017. To get notified of the exact premiere date – subscribe for updates below. 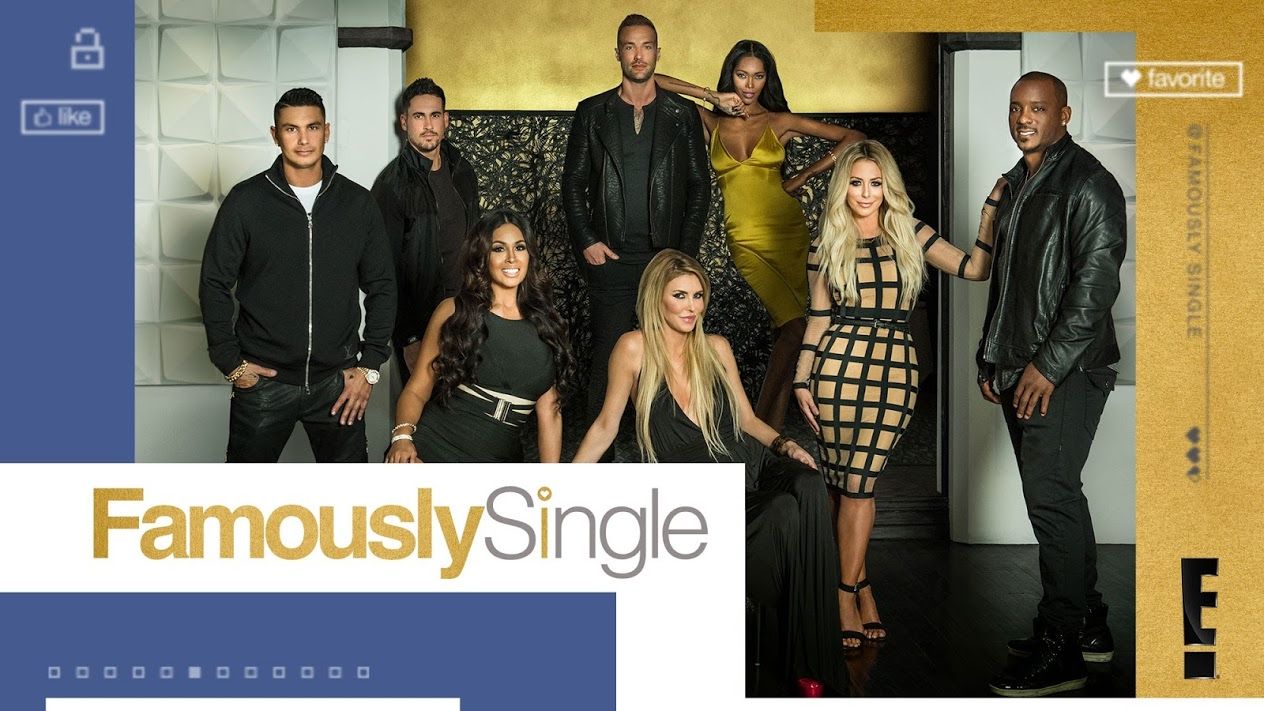 Famously Single is an American reality TV series that debuted on E! on June 14, 2016. The show`s produced by Irwin Entertainment and executive produced by John Irwin, Damian Sullivan and Alex Weresow. The show features eight single celebrities who move into one house together and attempt to find a solution to their lack of luck in romantic relationships.

The current season features the following cast members: Brandi Glanville (TV personality from The Real Housewives of Beverly Hills), Pauly D – (TV personality and DJ from MTV`s Jersey Shore), Aubrey O`Day (singer and songwriter), Josh Murray (winner of The Bachelorette season 10), models Jessica White and Calum Best, and Somaya Reece of VH1`s Love & Hip Hop: New York. Advising them on their quest to happiness and eternal love are Dr. Darcy Sterling, a psychotherapist and relationship expert, Laurel House, the author of “Screwing the Rules” and dating and empowerment coach, and Robert Mack, the author of “Love from the Inside Out”.

The series premiere drew 571,000 viewers, and the second episode was seen by 482,000 viewers. Famously Single has a 6.2 IMDb rating. The famous, the semi-famous and their personal problems are attracting a relatively humble audience, so it`s hard to imagine what turn its fate may take in the future. No renewal or cancelation announcements have been made yet regarding Famously Single, so please stay tuned if you`d like to find out what happens to the show.

The freshman season of Famously Single, a celebreality show on E!, has wrapped up on August 2, 2016. The season finale featured the usual overboard interpersonal drama, sexual overtones, confessions along with the final group session with Dr. Darcy. Over the eight episodes of the first season couples have formed, fell apart and formed again, everyone has shared their feelings, and some (like Brandi) have definitely overshared. The “six months after” update featured Aubrey and Pauly still together, while Brandi remained mostly oblivious to her past mistakes, telling the story of how she has dated an Uber driver, but quit the relationship because he smoked cigarettes. It’s hard to imagine why news of this caliber are not spread internationally, but at least now you’ve heard it from us. The series viewership went from 571,000 for the series premiere to 432,000 and a 0.21 demo rating for the final episode. The decline is predictable and far from fatal, and while the ratings are modest, they are very solid. It’s hard to predict whether we will see more of ‘celebrities’ trying to find their match in another installment of “Famously Single”, but we’ll keep an eye out and keep you informed.

UPDATED November 3, 2016: Great news for you fans – E!`s popular celebreality series Famously Single is coming back in 2017 for a second season of drama, romance and hopes. The upcoming installment will welcome eight new singles: Karina Smirnoff (Dancing with the Stars), Chad Johnson (The Bachelorette and Bachelor in Paradise), David McIntosh, Kardashian BFF Malika Hagg, Ronnie Ortiz-Magro, Tiffany Pollard, Calum Best (Famously Single season 1) and Dorothy Wang (#RichKids of Beverly Hills). Will they be able to walk away from the show with new skills and find new, more successful relationships in the future? We will be sure to inform you when a release date is confirmed for Famously Single season 2.

Share this with friends:
ReleaseDate.show » Release » E! officially renewed Famously Single for season 2 to premiere in 2017
Related Serial
When Will