This article has the most up-to-date info on the status of Bordertown season 2 as we continuously monitor the news to keep you in the know. Unfortunately, FOX has officially canceled the series. There will be no season 2. 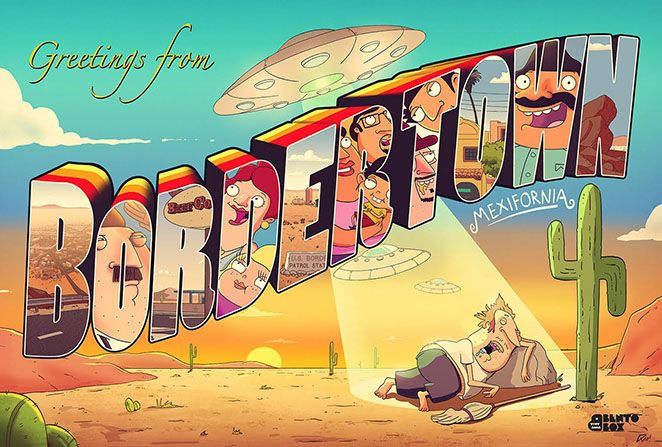 Bordertown is an American animated sitcom television series aimed at the adult audience. It is a collaborative creation by the Family Guy writer Mark Hentemann and Family Guy creator Seth MacFarlane, both of whom serve as executive producers for the program. Bordertown is produced by Hentemann Fims, Fuzzy Door Productions, Fox Television Animation and 20th Century Fox Television. The series premiere took place on January 3, 2016.

The comedy series follows the life of two families living next door to each other in a fictional town of Mexifornia – a name that makes it more than clear where exactly the town is located. Bud Buckwald is a border agent, and Ernest Gonzalez is an ambitious Mexican immigrant glad to be living on this side of the border.

There has been criticism of the underdeveloped characters and crude jokes that don`t even begin to do justice to the promising subject matter, making the show a failed opportunity. Reviews have been mixed, but some viewers find it hilarious, cunningly satirical and very relevant to the real issues of race and class. Bordertown premiered to a very decent 2.34 million viewers, with 1.1 million in the coveted 18-49 demographic. It`s been noted that Seth MacFarlane`s animation series have a history of ratings success practically regardless of their quality, so there`s no reason Bordertown wouldn`t follow in their footsteps. There hasn`t been any announcements made on either cancelation or renewal of the series, but a renewal seems likely.

UPDATED May 14, 2016: Unfortunately, none of the newly launched scripted comedies on the Fox network have stuck. Half of the Tuesday night comedy block’s shows have not been picked up for new seasons. The new animated sitcom Bordertown has also been officially canceled after just one run. The cancellation decision was driven by disappointing ratings of the new show, which has only delivered 1.8 million viewers per episode so far. The news comes ahead of the season finale scheduled to be broadcast on May 22, 2016.