This article has the most up-to-date info on the status of Steve Austin`s Broken Skull Challenge season 4 as we continuously monitor the news to keep you in the know. CMT has officially renewed the series for another season expected to debut in 2016. To get notified of the exact premiere date – subscribe for updates below. 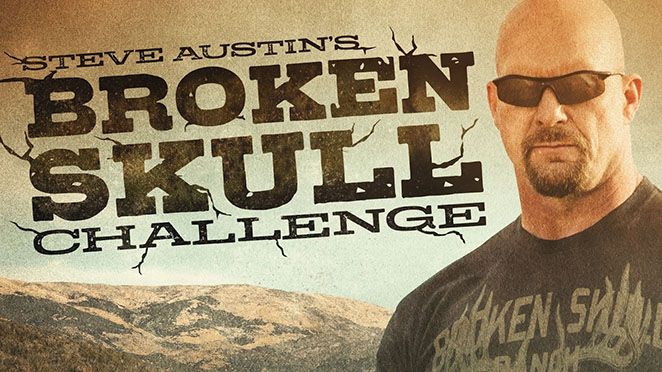 Each episode of the series portrays a group of eight same-sex contestants competing in a number of strenuous physical challenges. Contestants usually have athletic backgrounds and/or participated in other obstacle course competitions. Steve Austin`s Broken Skull Challenge is held at “Broken Skull Ranch”, not the actual one in Texas owned by Steve Austin, but an area near LA that is used to represent it. The challenges are undertaken in a head-to-head competition, and the contestants are eliminated in each round. The last one standing has to pass another tough obstacle course and has a chance to win upwards of $10 000.

The series` director Adam Vetri was nominated for Directors` Guild of America Award for Outstanding Directing – Reality Programs for one of the series` episodes. The second season returned with the premiere episode viewership of 754,000, which is a 48% increase compared to the first season average, and the third season is likely to keep to the trend. The program seems to have many fans, and there is likely to be more of the explosive and gritty action on screen.

UPDATED July 14, 2016: CMT`s popular contest Steve Austin`s Broken Skull Challenge very well may be the most physically challenging series on television, and its exciting fourth season is bound for the small screen later on in 2016. The participants in this intense competition hail from various sports, including powerlifting, crossfit, MMA, and many others, and are ready for the toughest challenges. Sign up for our automatic notifications, and we`ll keep you up to date on release date information.

Share this with friends:
ReleaseDate.show » Release » CMT officially renewed Steve Austin`s Broken Skull Challenge for season 4 to premiere in 2016
Related Serial
When Will