This article has the most up-to-date info on the status of Hollywood Game Night season 5 as we continuously monitor the news to keep you in the know. NBC has officially renewed the series for another season. To get notified of the premiere date – subscribe for updates below. 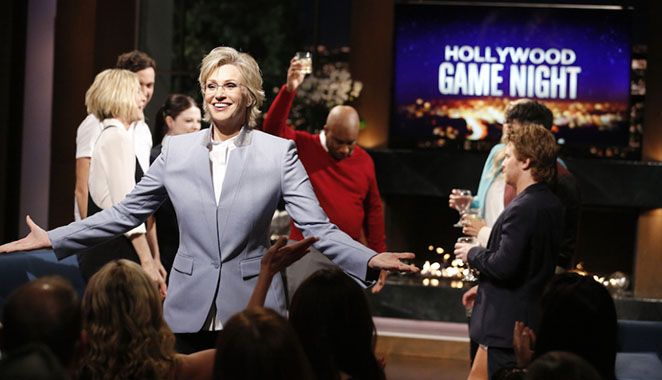 Hollywood Game Night is an American game show television series airing on NBC since July 11, 2013. It is produced by Hazy Mills Productions, Mission Control Media and Universal Television and hosted by Jane Lynch. The current fourth season premiered on January 5, 2016.

The series is set around two participants who team up with celebrities, forming two teams of three, on a casual game night, contending for a cash prize of $25.000. In each episode they play five of the wide variety of available casual games, and try to score as many points for their teams as they can. Among the program guests for the current season are Telenovela`s Eva Longoria, Geena Davis, Mira Sorvino, Helen Hunt, Kate Walsh, Marlon Wayans and many others.

The series has won several prestigious awards, such as 2014 and 2015 Emmys for Outstanding Host for a Reality or Reality-Competition Program for the fantastic Jane Lynch, and the Writers` Guild of America prize for Quiz and Audience Participation. Hollywood Game Night is a very popular show, perhaps due to the fact that it allows the celebrity guests to be seen in a casual setting. The audience enjoys the opportunity to get an almost voyeuristic glimpse inside a celebrity living room. Some viewers note the fact that celebrity guests interact naturally with each other, while others accuse them of overacting. Nonetheless, the series holds a 7.7 rating on IMDb, proving yet again that celebrity-related shows will always have an audience. There is an almost sure renewal in the cards for Hollywood Game Night.

UPDATED May 17, 2016: Season 5 is indeed in the works for the popular game show Hollywood Game Night! NBC has just renewed the series for another run in an expected move, since the program is a hit with the viewers and has garnered a number of significant awards. The new season is coming up with more casual celebrity interaction and games to be played. Sign up for our automatic updates and we will inform you when a release day is set for Hollywood Game Night season 3.

Share this with friends:
ReleaseDate.show » Release » NBC has officially renewed Hollywood Game Night for season 5
Related Serial
When Will