This article has the most up-to-date info on the status of The Increasingly Poor Decisions of Todd Margaret season 4 as we continuously monitor the news to keep you in the know. IFC is yet to make a decision on its future. Subscribe to our automatic updates below. 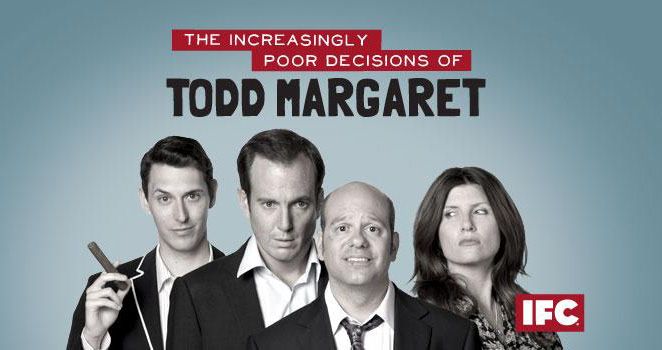 The Increasingly Poor Decisions of Todd Margaret is a British-American black comedy TV series airing on the Independent Film Channel since October 1, 2010. It`s created by David Cross (Tobias Funke from Arrested Development), written and executive produced by Shaun Pye, David Cross and Mark Chapell, co-executive produced by Cielia Mountford and produced by IFC and RDF Television. The seasons contain 6 episodes each, with the third season having just aired between January 7 and January 14, 2016.

The show portrays Todd Margaret (David Cross), a US office temp, who gets mistakenly promoted to lead a promotion campaign for an energy drink in Great Britain. He is transferred to the UK and most of the comedy in the first two seasons stems from his total lack of qualification for his job, a complete lack of knowledge of Great Britain`s culture and his pathological lying. The third season is a dream-within-a-dream continuation of the previous storyline, since the second season ended in some sort of a vague apocalypse.

The viewers who are into this type of absurdist comedy love it, and the 7.7 /10 rating on IMDb and 73% on Rotten Tomatoes demonstrate clearly that there are quite a few such appreciative viewers. This brilliant and original gem was seen by 0.139 million viewers on January 9, 2016, which might be far from an amazing number, but still is not bad for IFC. Hopefully, the enthusiasm of David Cross` fans will be enough to bring the show back on screen for another season. Since there was a large time lapse between the 2012 second the season and the 2016 third season, it might be a while before we hear any news on the future of the series.

Subscribe to receive news and updates when a show is renewed or canceled. You will receive an automatic email when theThe Increasingly Poor Decisions of Todd Margaret season 4 Episode 1 release date is officially announced.

Share this with friends:
ReleaseDate.show » Release » IFC is yet to renew The Increasingly Poor Decisions of Todd Margaret for season 4
Related Serial
When Will

This article has the most up-to-date info on the status of Feed the Beast season 2 as we continuously monitor the news to keep you in the know. Unfortunately, AMC has officially canceled the series. There will be no season 2.Show info and storylineA…

This article has the most up-to-date info on the status of American Gothic season 2 as we continuously monitor the news to keep you in the know. Unfortunately, CBS has officially canceled the series. There will be no season 2.Series info, storyline…

HBO has officially renewed Curb Your Enthusiasm for season 9