This article has the most up-to-date info on the status of Angel from Hell season 2 as we continuously monitor the news to keep you in the know. Unfortunately, CBS has officially canceled the series. There will be no season 2. 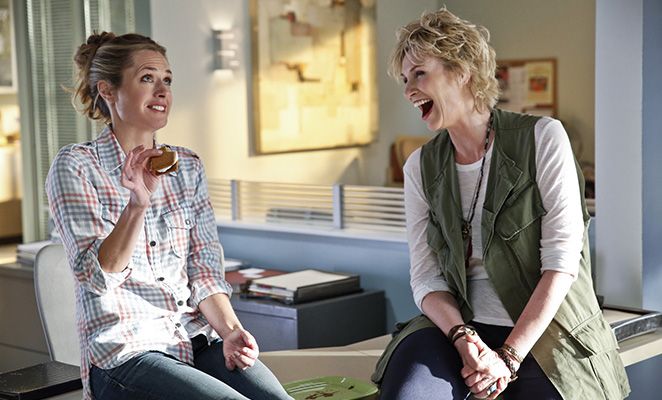 Angel from Hell is an American single-camera fantasy sitcom that premiered on January 7, 2016 on CBS. It`s created by Tad Quill, executive produced by Tad Quill and Don Scardino and produced by Quill Entertainment and CBS Television Studios.

Allison Fuller (Maggie Lawson) is a multi-tasking uptight perfectionist doctor who is confronted by Amy (Jane Lynch)an apparently mad woman claiming to be her guardian angel. After Amy convinces disbelieving Allison that watching after her is indeed Amy`s higher purpose, an unlikely friendship begins to form between the two.

The response from both viewers and critics has been mixed, some seeing the potential in the quirky comedy, its iconic lead Jane Lynch and the interesting premise. There`s also been heavy criticism of the lack of a compelling plot beneath the basic, although certainly worthwhile and ripe, idea, as well as of trite dialogue, and forgettable characters (except the very un-angelic angel). Right-wing Christian groups have called to boycott the series for the reason of its lack of respect for Christianity, although that couldn`t have had a drastic effect on viewership. Angel from Hell premiered to 8.04 million viewers, wit 1.6 million of them in the highly coveted P18-49 demographic, and a share of 5%. It is a typical strong number for a successful CBS series, suggestive of a good season ahead of it. If the comedy manages to keep its momentum through the freshman season, its fans are sure to see more of this fantasy odd couple.

Updated February 9, 2016: In an abrupt mid-season move CBS is canceling Angel from Hell, a caustic comedy series starring Jane Lynch and Maggie Lawson, just 5 episodes into the freshman season. The change is effective immediately, with 2 Broke Girls set to take over the Thursday 9:30pm slot. The series just didn`t do as well in the ratings department as the network expected it to, and did not quite manage to score the 1.3 -1.4 rating in the 18-49 demographic.

Angel from Hell season one finale – which ended up being the series finale as well – has aired on CBS on July 23, 2016. The 13-episode chapter wrapped up with an audience of 1.67 million viewers, which is close to the season average – with the exception of first two episodes that were seen by close to 7 million viewers. In the last episode Amy finally manages to convince Allison that she is, in fact, an angel, and reveals another unlikely secret about herself – she is a married… angel! Amy needs Allison`s help in breaking up Kelly and Hank`s relationship before it`s too late and they tie the knot, so there`s no lack of drama in the last episode of the series. Unfortunately, in view of the sharply dropping viewership ratings Angel from Hell has been canceled, and even the highly praised performance by Jane Lynch was not able to save it from being axed.