The release date for The Family Law series 2 — Pending

This article has the most up-to-date info on the status of The Family Law Series 2 as we continuously monitor the news to keep you in the know. SBS has officially renewed the series for another season expected to debut in 2017. To get notified of the exact premiere date – subscribe for updates below. 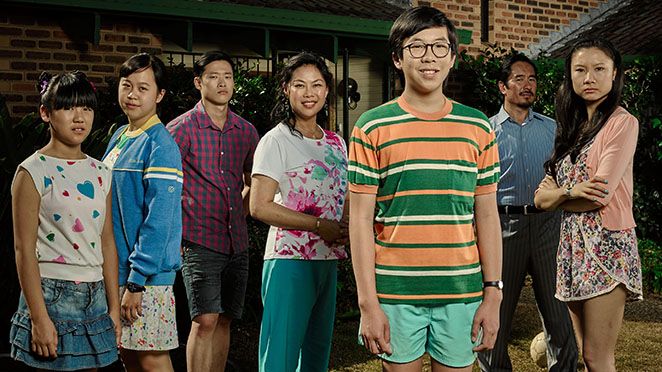 The Family Law is a new Australian sitcom television series broadcast on SBS AU since January 14, 2016. Benjamin Law is the author of the 2010 best-selling memoir that served as the basis for the series and the co-writer of the series with Marieke Hardy. MatchBox Productions is the company behind the series, and Tony Ayres and Debbie Lee executive produced the six-episode series.

The comedy series centers around an extended Chinese-Australian family of seven, and one particular long and hot summer in their lives. Benjamin Law (Trystan Go), the 14-year old lead character, and his relatives live in the suburban Sunshine Coast in Queensland. The dysfunctional relationships of his parents, three sisters and a brother are portrayed with a seriously comedic slant and are coupled with the inevitable race-related issues of living in a predominantly white neighborhood.

The first episode of the series premiered on Facebook prior to its broadcast debut – an unusual step to take, but one that attracted an impressive 1.1 million views. The following broadcast premiere scored close to 0.5 million viewers, and a 9.6% and 6.8% share in the Metro and Regional areas, respectively. The hit series also garnered extensive praise for portraying an Asian Australian family, as many people expressed their appreciation of this fact on social media. There seems to be an excellent chance of a renewal for Family Law, as it fills a practically empty niche that desperately needs to be filled.

UPDATED June 27, 2016: It took SBS several months of contemplation after the first series of The Family Law has wrapped up to renew it for another run. The renewal was well-expected, since the series has been garnering a positive critical and audience reception, so the fans may start celebrating. Besides the fact that the family comedy serves up universally relatable themes, it does so with a 90% Asian-Australian cast, which is certainly an unusual and welcome development. Filming will begin later on this year in Queensland, and the program should air in 2017. Sign up for our automatic updates and receive release date information right in your inbox.

Share this with friends:
ReleaseDate.show » Release » SBS officially renewed The Family Law for series 2 to premiere in 2017
Related Serial
When Will

The release date for Two Doors Down series 2 — November 21, 2016This article has the most up-to-date info on the status of Two Doors Down Series 2 as we continuously monitor the news to keep you in the know. BBC Two has scheduled the premiere date…