The release date for It`s Not You, It`s Men season 2 — Pending

This article has the most up-to-date info on the status of It`s Not You, It`s Men season 2 as we continuously monitor the news to keep you in the know. OWN is yet to make a decision on its future. Subscribe to our automatic updates below. 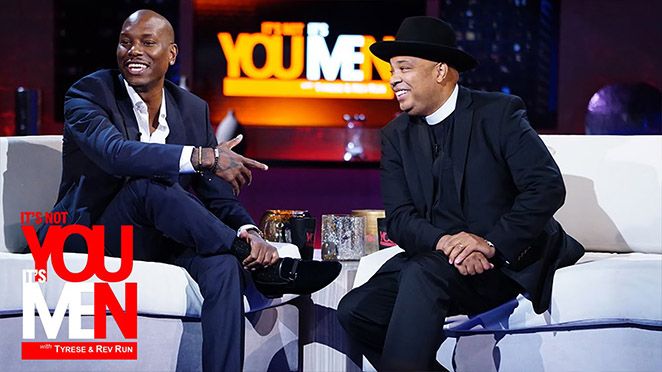 A new primetime talk show on OWN entitled It`s Not You, It`s Men premiered on January 16, 2016. It is hosted by the hip-hip legend Rev Run and movie star and platinum recording artist Tyrese Gibson. The show is produced by OWN, Voltron Pictures and Simmons/Lehman Productions, and executive produced by Eric Pankowski, Tyrese Gibson, Joseph Simmons, Jerome Martin, Isabella Castro and Michael Lehman.

The series features conversations with a variety of celebrity guests on the subjects of love, sex, marriage, dating, romance… well, you get the idea. The two hosts have very different views on these matters – Tyrese is a single father in search of the perfect life partner, while Rev Run has been happily married for 20 years and has six children.

Among the celebrities for the debut season are actor Vin Diesel, Rev Run`s wife Justine Simmons, comedian and actor Marlon Wayans, comediennes Jessimae Peluso and Loni Love, American Idol winner Jordin Sparks and spiritual life coach Iyanla Vanzant. Passionate discussions and comedic banter are sure to entertain. It`s Not You, It`s Men also features advice from relationship experts – CEO of Tinder Sean Rad, journalist Tracy McMillan and Dr. Helen Fischer, an anthropologist specializing in gender issues and love. As of late January 2016, the series averages approximately 0.5 million viewers, with a rating of 0.15 in the 18-49 demographic. The talk series seems like a successful debut for OWN, and may very well be picked up for a renewal.

Subscribe to receive news and updates when a show is renewed or canceled. You will receive an automatic email when theIt`s Not You, It`s Men season 2 Episode 1 release date is officially announced.

Share this with friends:
ReleaseDate.show » Release » OWN is yet to renew It`s Not You, It`s Men for season 2
Related Serial
When Will

The release date for Lip Sync Battle UK series 2 — PendingThis article has the most up-to-date info on the status of Lip Sync Battle UK Series 2 as we continuously monitor the news to keep you in the know. Channel 5 is yet to make a decision on its…