The release date for Mine Hunters season 2 — Pending

This article has the most up-to-date info on the status of Mine Hunters season 2 as we continuously monitor the news to keep you in the know. National Geographic is yet to make a decision on its future. Subscribe to our automatic updates below. 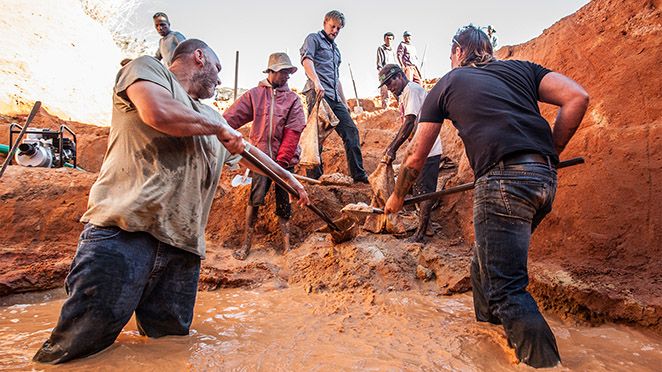 Mine Hunters is an American documentary-style adventure and reality television series that premiered on the National Geographic channel on January 19, 2016. It is produced by RDF USA. The series is set to have eight one-hour episodes.

Well-known to people in his industry, United Kingdom gem hunter Guy Clutterbuck assembled a specialist crew to undertake a mission to search for and, hopefully, find the world`s rarest and most precious gem stones. This search will take them around the globe to the most remote corners where the small scale gem mines can be sourced. Their approach to mining is different from the shady business that often ensues, as Clutterbuck is a proponent of ethical mining. The specialist squad will work together with local miners in the hand-dug artisan mines by permission of the local authorities and/or land owners, and will then share the profits, if there are profits to share. Guy Clutterbuck has over 30 years of experience in sourcing and selling precious stones all over the world, and in each episode his leads will bring the crew to one place to search for one specific gem. These locations include Greenland, where arctic rubies can only be mined during its short summer, Sri Lanka, where a very special type of sapphire can be found, and Zambia – for the purest of emeralds.

Fred Schilplin, an American engineer, Australian miner Jimmy Dinnison, as well as a gold prospector and explosives expert from the USA and a British ex-Army mechanic will work together, but, as it often ensues under extreme conditions, personal relationships will also get strained. The team is operating at their own financial risk, so will the enterprise turn out profitable? Another relevant issue here is whether the series will be successful. Mine Hunters opened to 0.458 million viewers and a 0.1 rating, and saw a drop to 0.408 for the second episode. It`s hard to predict the fate of the series at this point, so please stay tuned for new developments.

Subscribe to receive news and updates when a show is renewed or canceled. You will receive an automatic email when theMine Hunters season 2 Episode 1 release date is officially announced.

Share this with friends:
ReleaseDate.show » Release » National Geographic is yet to renew Mine Hunters for season 2
Related Serial
When Will