This article has the most up-to-date info on the status of Fit to Fat to Fit season 2 as we continuously monitor the news to keep you in the know. A&E has officially renewed the series for another season. To get notified of the premiere date – subscribe for updates below. 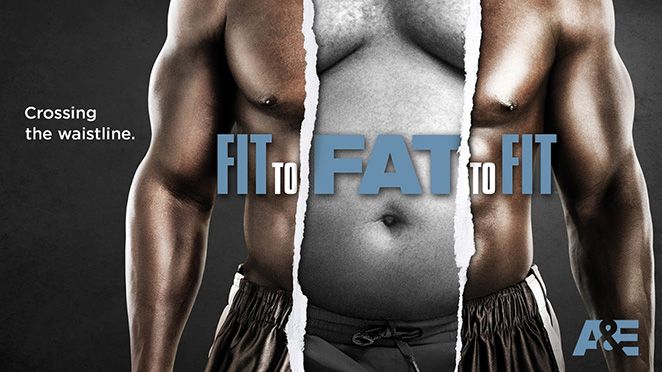 Fit to Fat to Fit is a new US documentary series that has premiered on A&E on January 19, 2016. It is a co-production between Renegade 83 and Gaspin Media. Dan Partland, Jay Renfroe, David Gafinkle, Jeff Gaspin, Shelly Tatro, Brad Abramson and Rick Hankley serve as executive producers for the series.

The series` concept is an unusual one, and has caused controversy among viewers. 10 personal fitness trainers around the country made a decision to put on significant amounts of weight in order to better understand the predicament of the clients who come to them with a goal of losing weight. Afterwards they start on the weight loss journey together with their clients, shedding the undesired weight as a team. Whether or not this is a good idea – well, there are polar opposite opinions on that matter. Some cite medical reasons and claim that this just isn`t a sound approach, others praise the trainers for trying to better understand the issues of their clients.

The series premiered to 0.599 million viewers and a 0.26 rating in the 18-49 demographic, the second saw a significant increase to 0.722 milliton and 0.34, and the third episode actually had a partial relapse down to 0.644 and a 0.33 rating. If Fit to Fat to Fit continues to fare well, we very well might see a renewal of the docuseries. Weight-related issues and various takes on them are a significant part of many Americans` lives, which ironically is the case largely due to the media. Thus, since this is a self-perpetuating cycle, so we are likely to see more of this show, for better or for worse – depending which side you are on.

UPDATED June 13 2016: The controversial reality series Fit to Fat to Fit that the majority of viewers has a love-or-hate relationship with, has been renewed for a second season. The program is currently casting new personal trainers who are willing to go from their top-notch physical shape to gaining a large amount of unnecessary weight only in order to shed it again. The concept of the show presumes that this ordeal will help them better understand their overweight clients. No details regarding a possible release date have been revealed yet, so please sign up for our automatic updates and receive relevant info via e-mail.

Share this with friends:
ReleaseDate.show » Release » A&E has officially renewed Fit to Fat to Fit for season 2
Related Serial
When Will

USA Network is yet to renew First Impressions for season 2